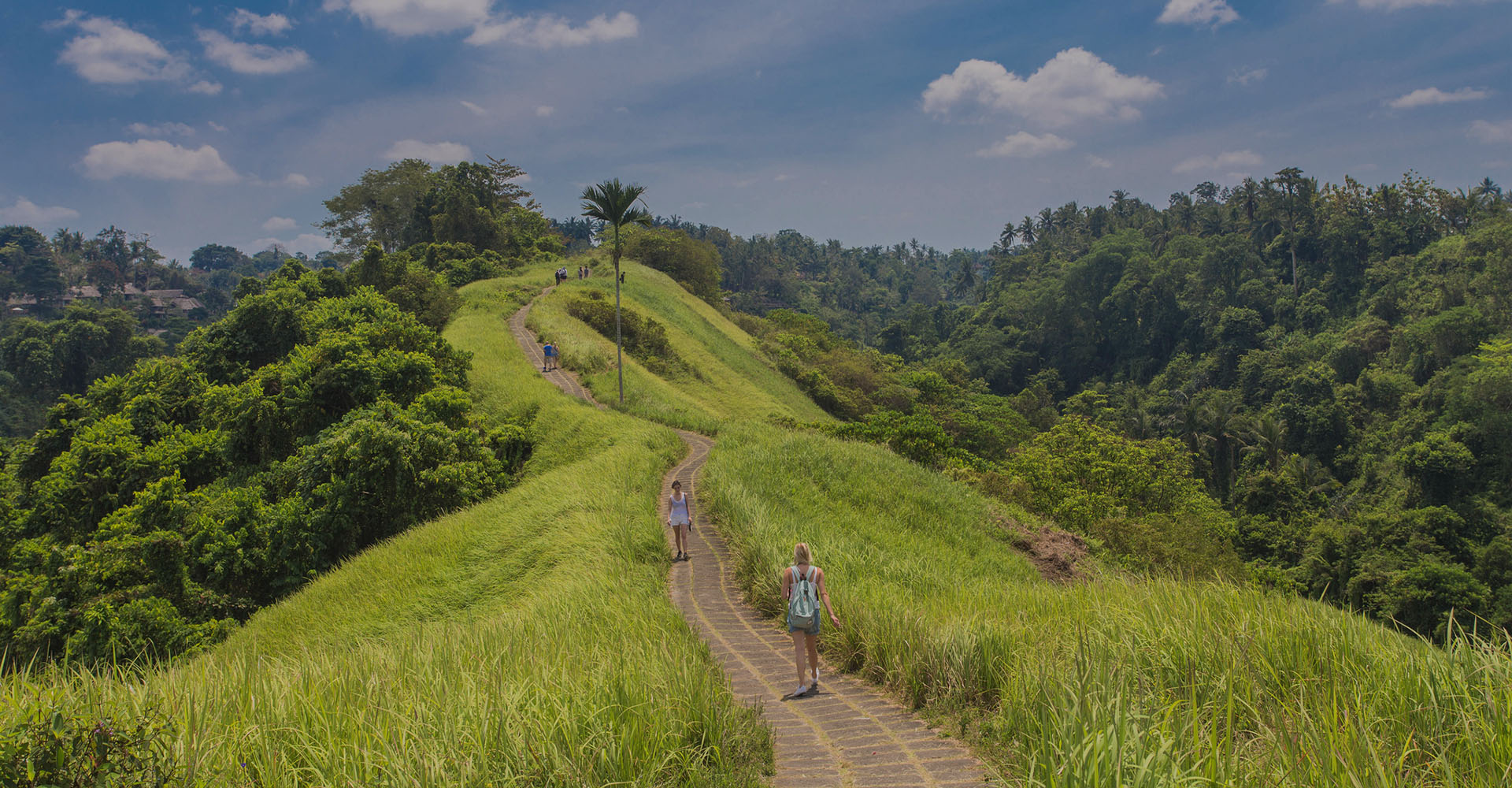 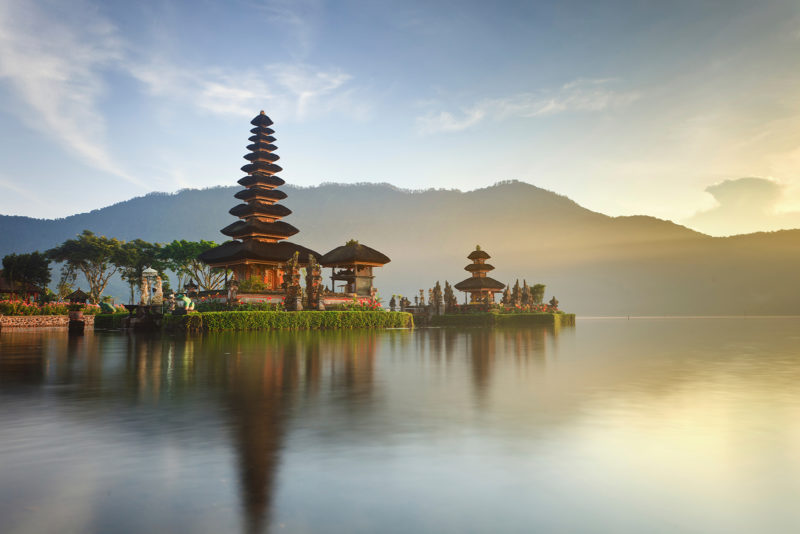 Indonesia is a beautiful assault on your senses. It is a spectacle of beaches and volcanoes. It is rich diversity coupled with pulse raising adventure. It is the extraordinarily imaginative Sumatra and the enterprising Flores. It is the gradual hair raising excitement when you go from watching the lounging orangutans to the prowling komodo. From the precision of the Balinese dancer to the idyllic white sands of the Sumbawa; the glamour of Jakarta to the dramatic history of the Banda Islands; mouthwatering Bali to the magnificent Borobudur, it is the sheer contrast that one encounters here that makes Indonesia a truly intriguing experience.

Feed Orangutans at their Center in Bukit Lawang and enjoy a slice of salty sands at the tip of the Sumatra in PulauWeh. Try your hand at a variety of delicacies at Jenny’s and visit the jungles of Gunung Leuser National park. Explore Java and its historical significance at the Borobudur Temple, trek to the top of Mt. Bromo or the Ijen Crater for a surrealistic experience. For the nature enthusiasts, the SekumpulWaterfallas and the Sacred Monkey Forest Sanctuary in Bali is a certainty. Enjoy a cruise to Menjangan Island or opt for a tour of the handicraft villages of Yogyakarta. Top it all off with an encounter with heaviest lizards on earth, the famed Komodo Dragons at Labuan Bajo.

Whether it is the authenticity of the Sumatra or the laid back vibe of Raja Ampat Islands of Papua, you can always find something that takes your fancy throughout this archipelago. A land of so many different cultures and customs, Indonesia is a gift bag of monumental temples, beautiful scenery, beach resorts, fascinating animals and ominous volcanoes. Dive into adventure as we guide you through the very best of everything that the land has to offer because whatever you are seeking, Indonesia probably offers just that.

Places to visit in Indonesia 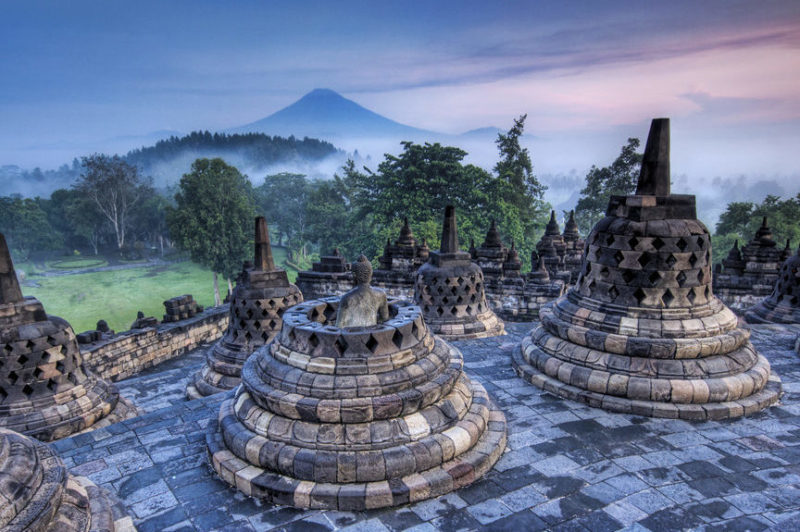 Today, you will allow yourself to be stumped out of your wits at the glorious monument which took three-quarters of a century to complete, Borobudur. Apart from being one of the seven wonders of the world, it is also a warrior of a structure having survived a multitude of disasters like eruptions, bombs and earthquake to still stand proud and strong. A paramount testament of human will and labour, Borobudur remains, to this day, the highlight of the architectural brilliance in Southeast Asia. Post lunch, spend the rest of the day wandering through the streets trying your hand at the local food stalls that crop up as the sun starts its descent, providing a beautiful backdrop to the shadows, still bustling about with enthusiasm. 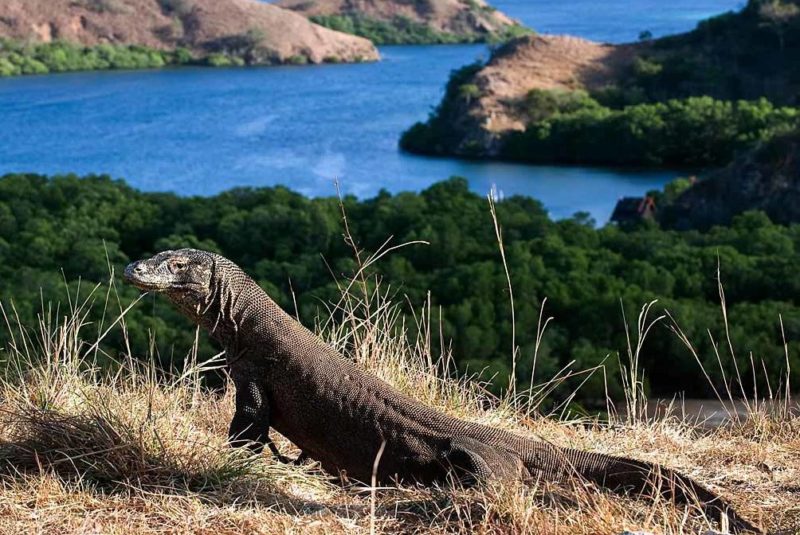 Named after the dragon it is most famous for housing, Komodo is a wakeup call for the senses. From its breath-taking views to the aromas and sounds of the jungle, it is also the largest island in the National Park. Careful not to lose yourself in those though, as you may miss the main attraction of the show. The largest living lizard on earth, the Komodo Dragon can be spotted across the three major islands; Rinca, Padar and Komodo, and is, quite unsurprisingly, rated far up in the food chain. Being apex predators themselves, there are only a few that prey on them. Trek through the forest, guided by a professional of course, and catch glimpses of animals in their natural habitat. Apart from the infamously sinister Dragons, wild animals such as buffalo, deer, pigs and tropical birds like the cockatoo can be seen. 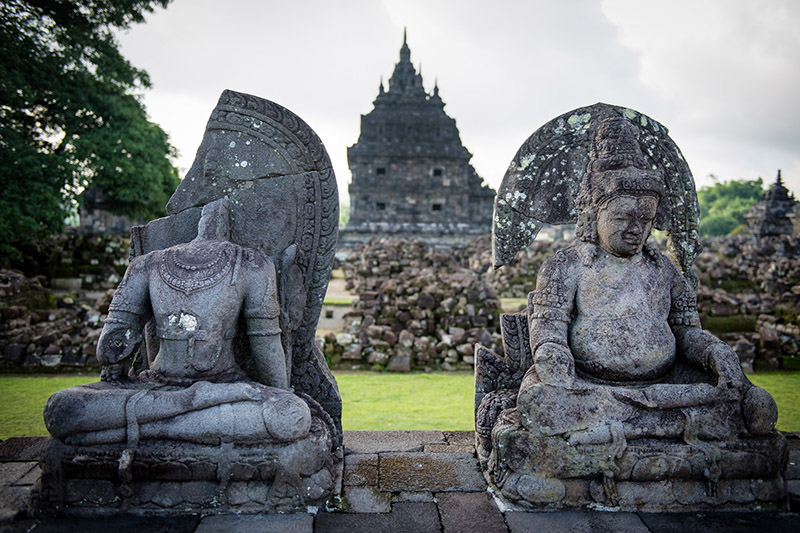 Make your way to Bugisan where you get to learn and play the Gamelan, an ensemble of musical instruments varying from percussions to flutes. Snack on the bitter yet delicious local cracker called emping, made from melinjo or belinjo nuts. Educate yourself on the manufacture of the significance among the people of a traditional and predominantly herbal medicine called Jamu. Although its primary ingredients are parts of plants such as roots, bark, flowers, seeds and the like, honey and milk may also be added for sweetening. 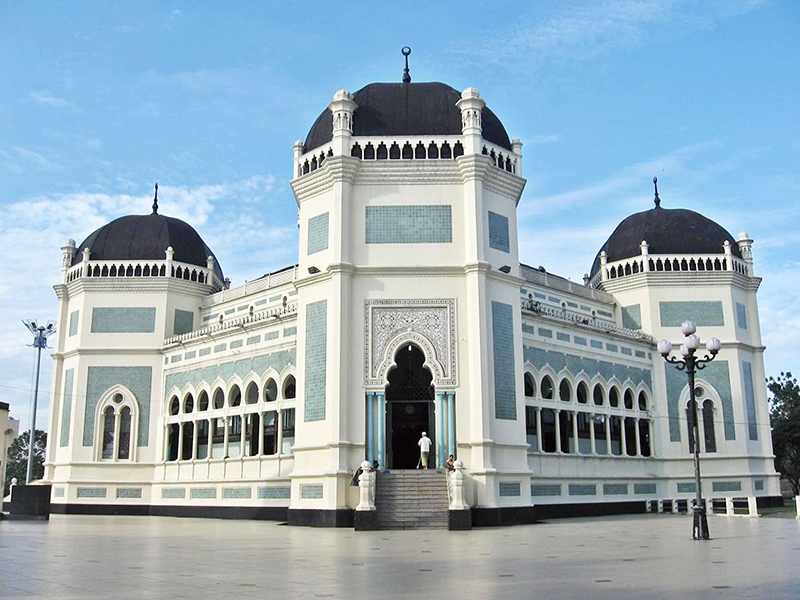 Overflowing with everything that symbolizes a city, Medan is lined with malls and restaurants and the perfect blend of excitement and calm to while the time away. Head to Bukit Lawang via the Maimoon Palace of Medan, built by the Sultan of Deli, as Medan was formerly called. Serving as a museum today, the Palace was built by Sultan Ma’mun Al Rashid Perkasa Alamyah under the creative brilliance of Dutch architect, Theodoor van Erp, and has a total of 30 rooms. Visit the Great Mosque, built in 1906 and combining the architectural styles of the Middle East, India and Spain. Also developed by the Sultan, he decreed that it be more important than his own Palace. Complement the epic nature of the tour with an exploration of the Gunung Timur Chinese temple, which is the largest in Medan. Harbouring a large paved area with an impressively scaled incense burner and two covered badminton courts, it also houses a huge main hall and incomplete boundary of a moat and walls. 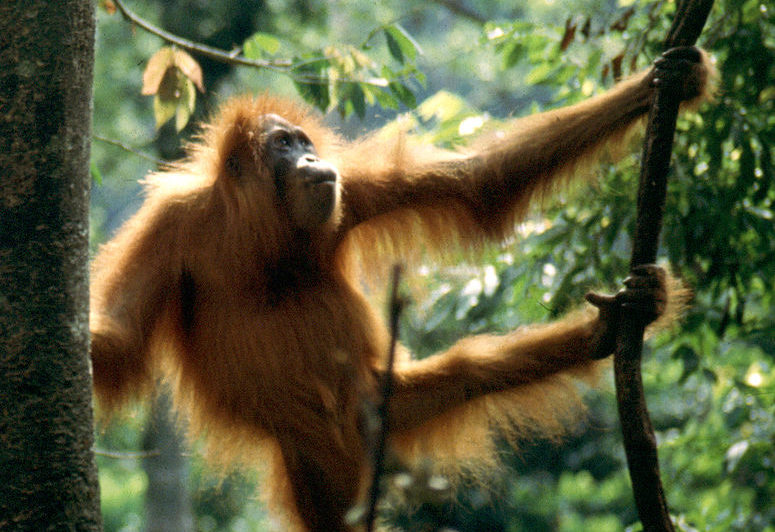 Don’t be fooled by the popularity of the orangutan viewing centre because that isn’t the only lure of the forests of Bukit Lawang. Essentially a National Park, the area ensures the continued existence of countless species of animals and birds. A tour of the vast Gunung Leuser National Park may enable you to cross paths with a wide array of primates, tigers, rhinos, elephants and, most excitingly, the exotic Thomas Leaf monkeys. Trek along the rainforest path catching glimpses of these elusive mammals before returning to your lodge for a leisure lunch and a visit to the Eco Park. Check in to your lodge upon arrival at Tangkahan and register yourself at the Gunung Leuser National Park. 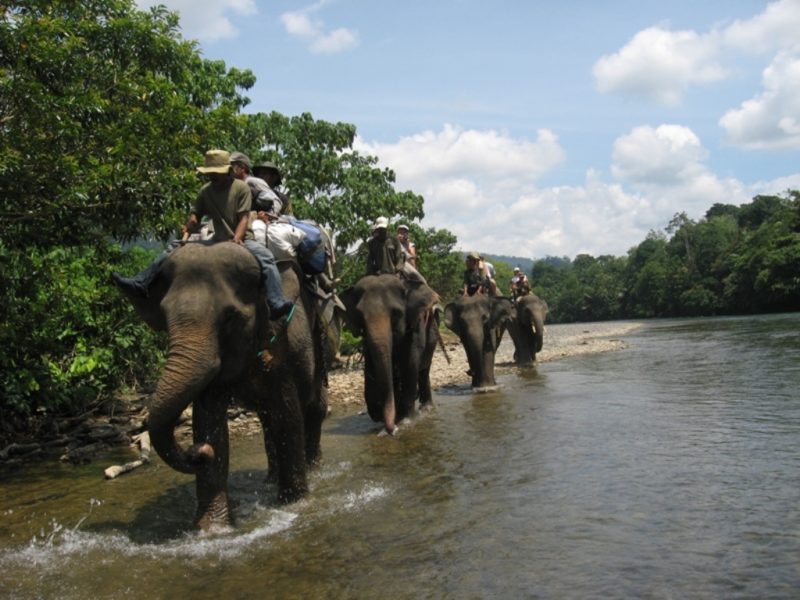 Once a place where animals came to die, a hellhole teeming with nefarious loggers and poachers, Tangkahan has seen a mind boggling transformation over the past couple of decades thanks to a team of ecologists and others who laboured behind the government for this natural habitat of countless species to be declared a protected area. Resembling more of a gateway than a village, Tangkahan may be seen as a portal to a paradise which houses and protects a wide range of animals, the most popular of them being the elephants.

In theory, in the tropical archipelago, November-April are the wet months and October-May are dry. But let’s not set much store by this! It’s really hard to tell the difference and the temperature always remains between 21 – 33 degrees. In Northern Sumatra, this pattern is reversed.

The peak tourist season, when the hotel prices sky rocket, is during the months of June-September and during Christmas and New Year.

For Unique Experiences around the world, check here. 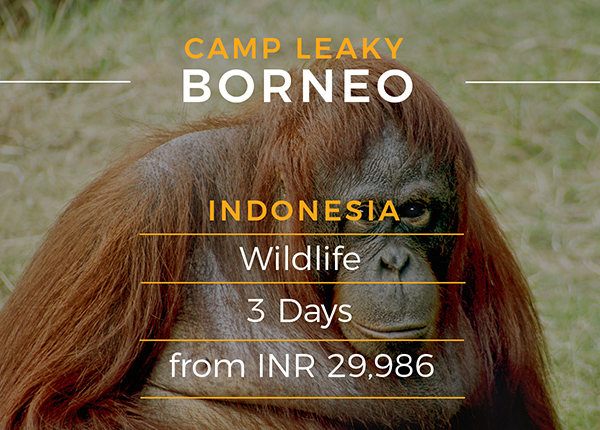 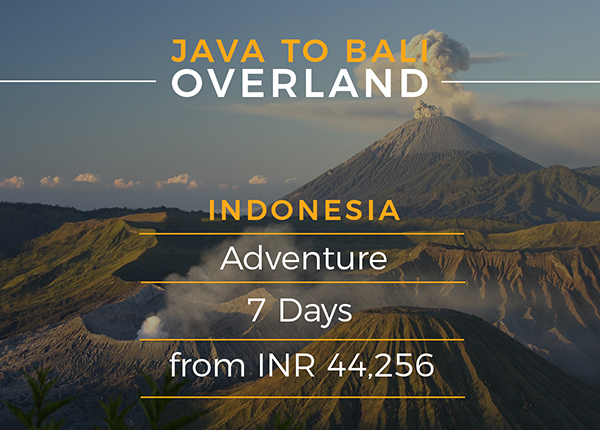 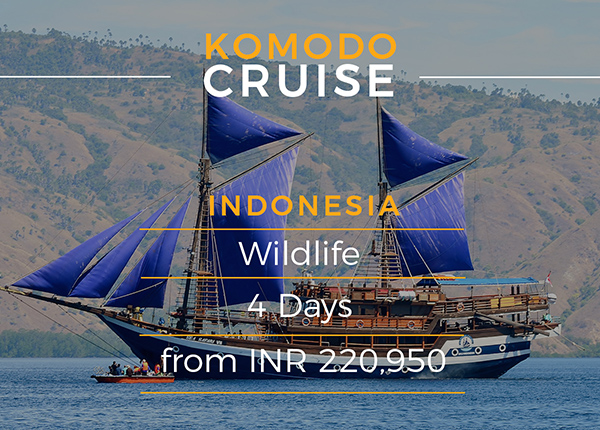 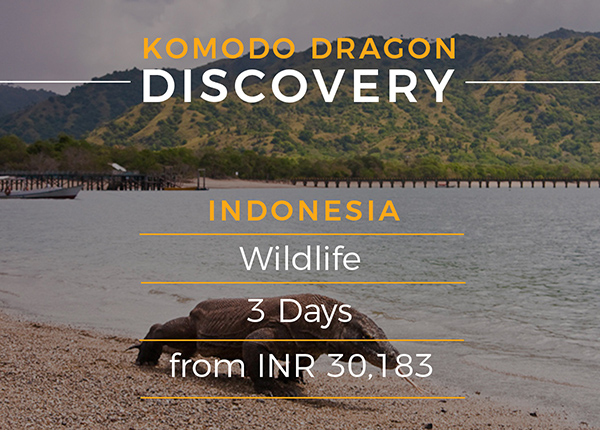 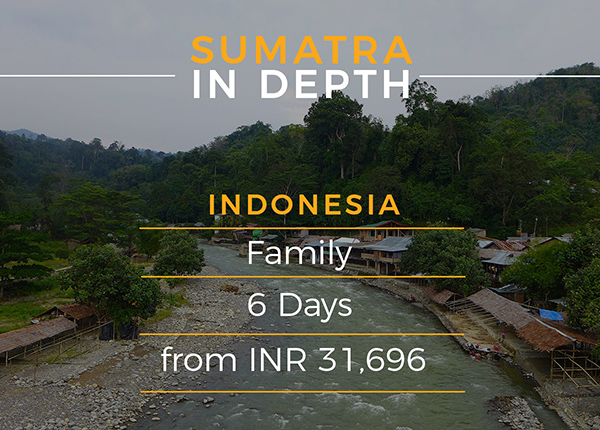 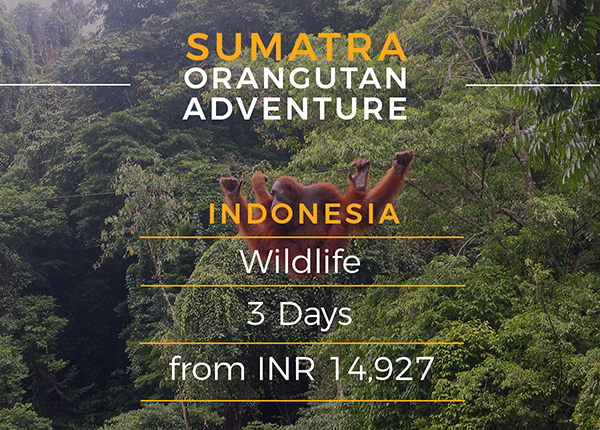 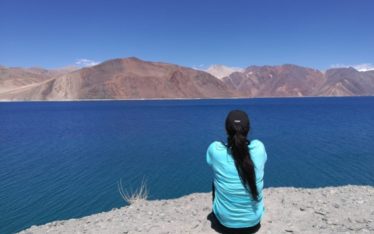