Nongriat – of legends and folklore!

Nongriat – of legends and folklore! 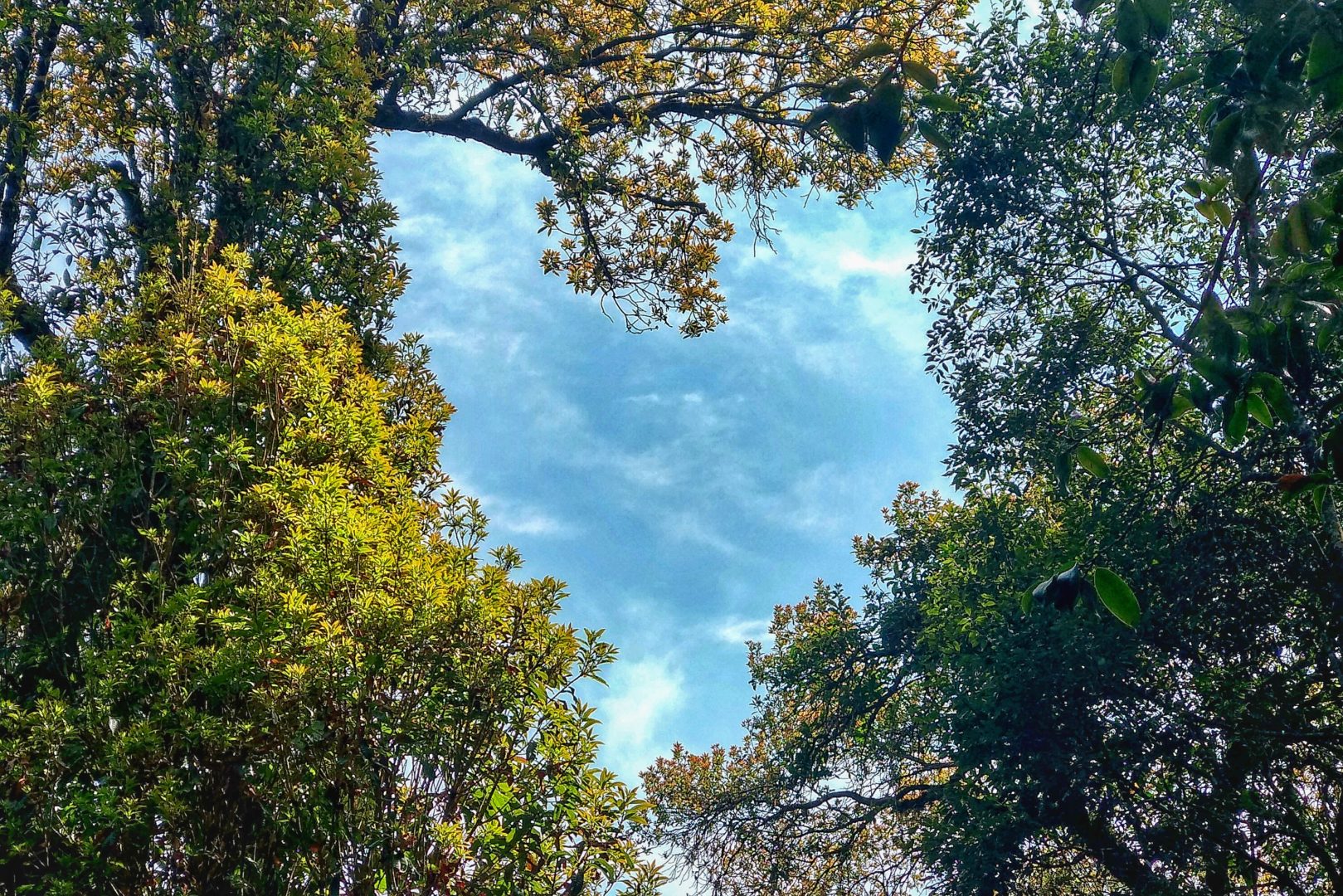 Beyond the cafes of Shillong, below the waterfalls of Sohra, after climbing down 3,500 steps, lies a small forest village of Nogriat. Popular for its well photographed Double-decker root bridge, a lot of visitors visit the village for a day hike. But to really know the folklore of the “Sacred Grove”, you need to spend a few days here, in Nongriat.

Nongriat is a combination of two words – “Nong” meaning village, and “Riat” meaning cliff or a ridge, so “a village surrounded by ridges”, and that’s exactly what Nongriat is. People of Nongriat were once the inhabitants of a neighbouring valley, “Thied Dieng”. They were experts in building useful things using tree roots.

Some 250 years ago, they experimented with planting rubber trees on either side of a River and waited and weaved the roots to strong root bridges over years. The result was the art of building root bridges, that has endured the forces of Mother Nature for centuries. No particular family or group did the work, but the whole village cooperated with the forest to build these bridges. The first root bridge was built over the Umshiang River some 250 years ago but was overflown during a heavy Monsoon season. This encouraged the villagers to build another one on top of the old one. This gave birth to the idea of the Legendary Double-Decker Root Bridge. The idea was passed on from one generation to the next, and from village to village. The original inhabitants of Nongriat in the “Thied Dieng” valley perfected the knowledge of weaving these amazing bridges and brought it with them when they migrated to the current valley. 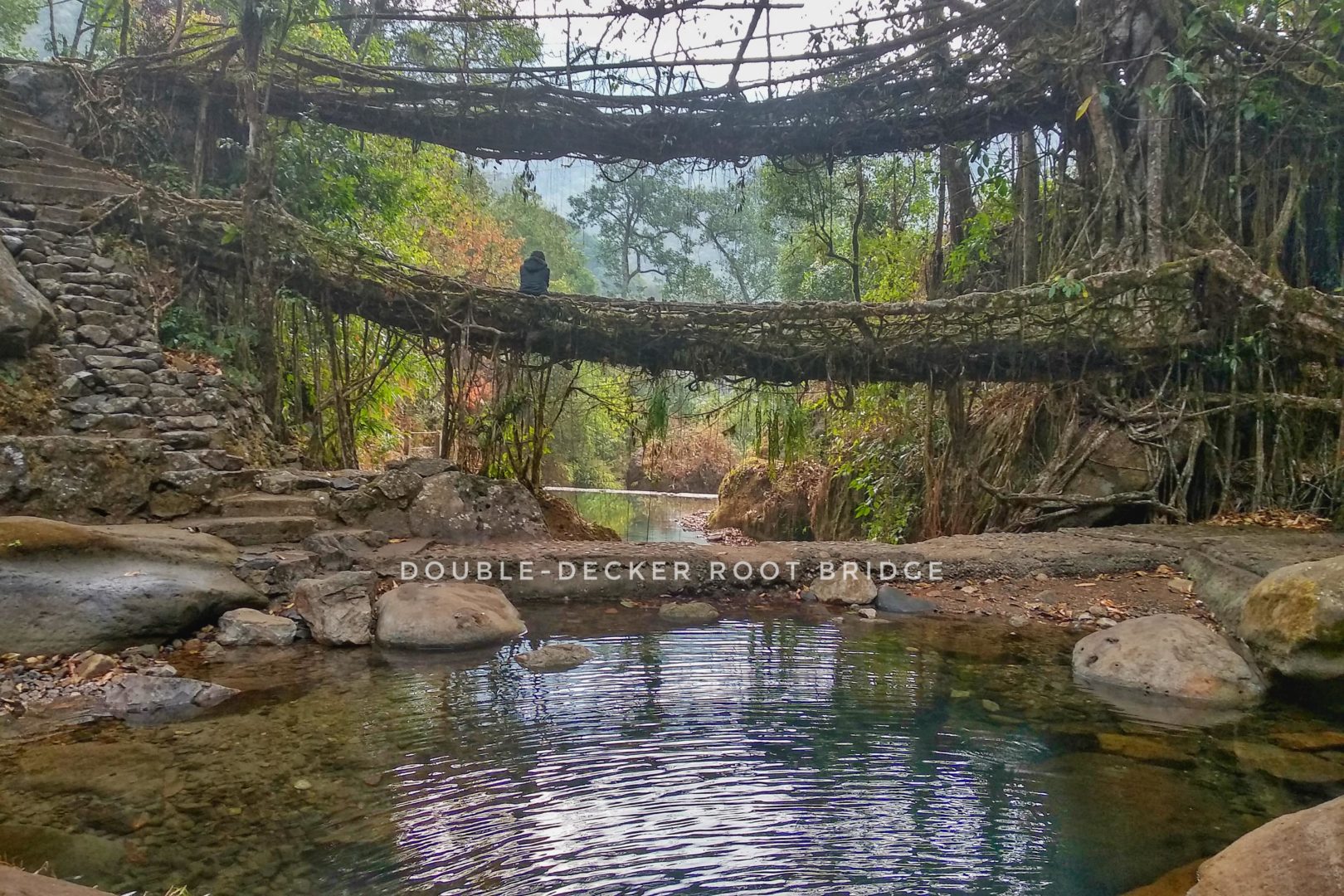 Tale of Nongriat – of survival and adaptation

Around 250 years ago, a terrible war was fought between “Mawphu” village and the original Nongriat village in the Thied Deing valley, over the fertility of the land. Nongriat lost and the surviving inhabitants fled to the present valley. But the Mawphus was not done yet – they sent a bunch of sacrificial bulls to rampage the village and the land, but the Nongriat inhabitants captured them and ate almost all of them. This victory was short lives as the inhabitants who ate the meat died, as the meat was poisoned by the Mawphus. Everyone died except a family of 4 brothers and a sister. The survivors decided split into five clans and moved around in the valley to build and repopulate 5 villages, namely, Tyrna, Nongriat, Mynteng, Ramdait, and Nongkroh. This adaptive distribution of the surviving population ensured that the Nongriat bloodline survived any future aggression by the neighboring villages or kingdoms. In hindsight, the strategy definitely worked. The population multiplied and prospered over the years in all five villages. The central village of Nongriat now has about 40 households and a population of around 250 people. The villagers are short and thin, but strong and healthy. They live long, due to the abundance of clean water, food, and rich oxygen from the rainforest.

Ri Khasi (or “Khasiland”) was the original name of the kingdom which was ruled by 30 kings and 12 dolois. It was renamed Meghalaya when the “Agreement of Accession” to India in 1948 was signed. The Khasi tribe has no script or written language of their own. The stories of history are passed on from generation to generation. It is believed that their forefathers originated from Cambodia and were known as the Khmers or Mon Khmers. Most of the migrants, who are now known as Khasis, ended up in these lush forested hills, which were uninhabited and unclaimed are now called the Jantia Hills. 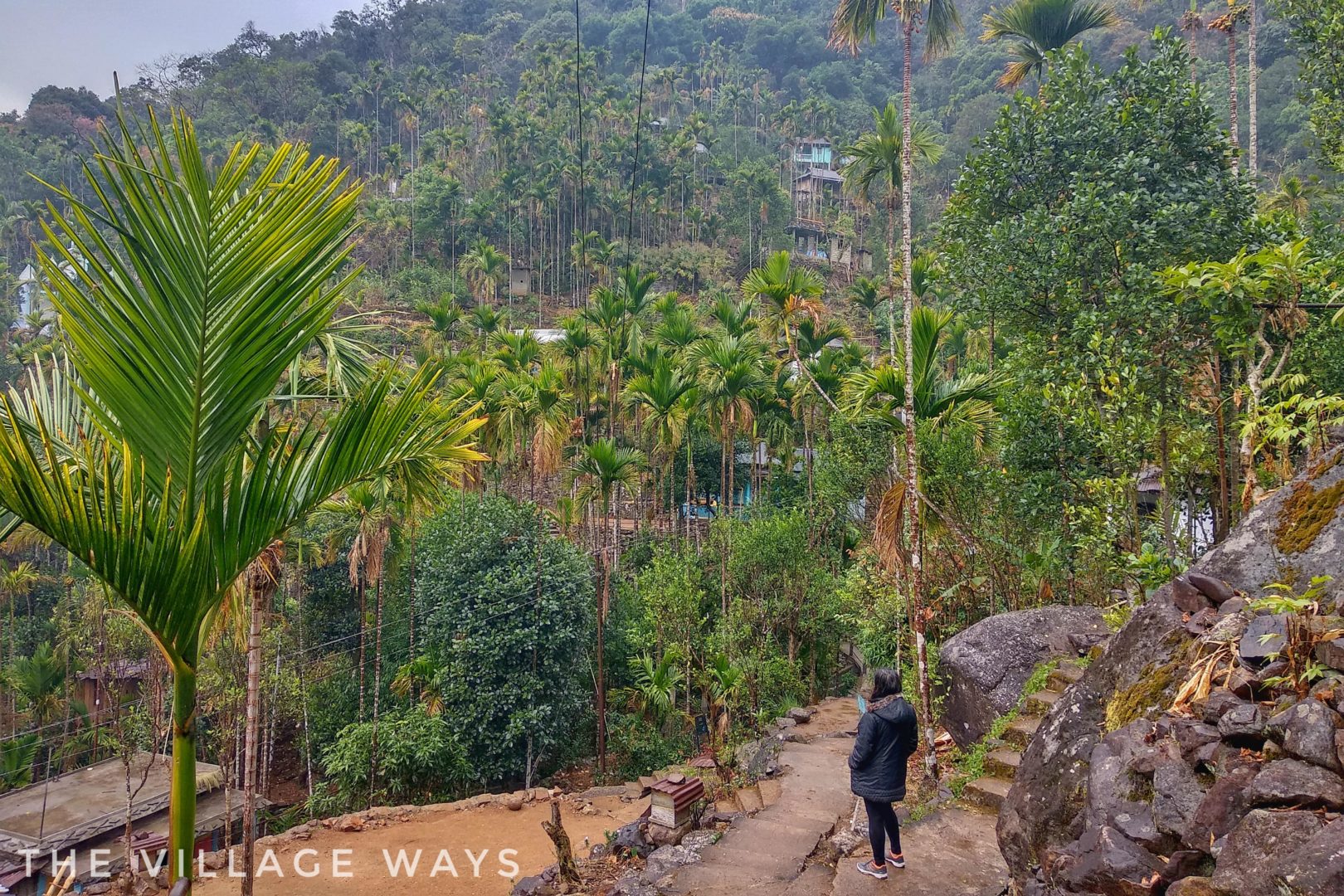 Legends of the Sacred Grove

The Khasis believe in their own indigenous religion, where they believe in Gods and Deities and their presence in Nature all around. They also believe in Elementals such as fairies (black and white/good and bad) in the Rivers, dwarves in the caves, and the presence of the spirit in all living as well as non-living things. They believe that the burning of the forests, fishing in the Rivers, rampant cutting of the trees, and hunting animals may lead to a curse by the deities and the vengeance will be served to them and their children, and grandchildren. However, they also rely on these forests for survival. So, to prevent the curse, they call upon all the spirits to reside in a selected part of the forest, called the “Sacred Grove”. Any curse-able activity is prohibited in these groves, even picking fruits or plucking flowers is forbidden. Small sacrifices are still made to the deities annually, where small and young animals like roosters are sacrificed. 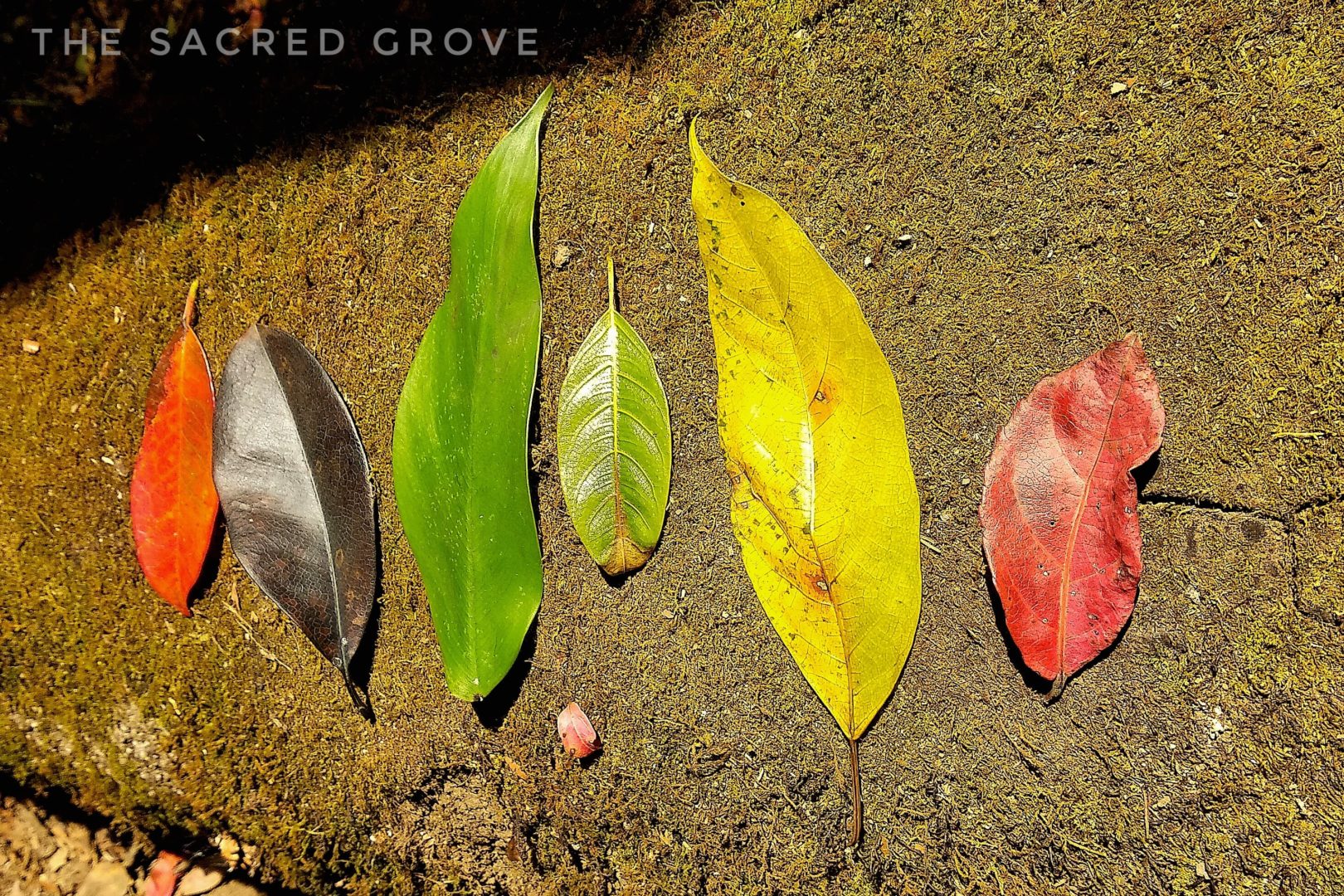 The Legend of Ka Nohkalikai

The legend follows a beautiful girl named “Likai” who lives in the village of Rangjyrthe, not far from the present Nohkalikai waterfall, who married at a ripe age and gave birth to a baby girl, which turned out to be a blessing to the family. The child drew the attention and affection of the whole village.

Her fate changed when Likai’s husband died unexpectedly, and she later considered another man’s proposal for marriage. As time passed, her second husband developed a disliking towards all the affection that Likai’s daughter used to receive. The dislike slowly grew into hatred. One day, in a fit of rage that knew no bounds, he killed the little child while the mother was out for work, cut her into pieces, and cooked her, and left the house. Unaware of the terrible act of her husband, Likai returned home tired and hungry and ate her child’s cooked meat considering it to be some animal. It was when she went out looking for her daughter and found the fingers of her child in the basket outside; did she realize the monstrosity that had taken place in her absence. Tears, guilt, regret, and rage-filled her heart and her mind. She searched for her husband but he was nowhere to be found. This enormous burden led her to the top of the tall waterfall. She stood there like a statue, dazed and distraught, with no reason to live, as the unaware villagers followed her to the edge. She jumped from the edge to her death. Since then, the legend of Likai has stayed with the Khasi people, and the story has been told and retold by many mentioning the waterfall – Nohkalikai Falls. 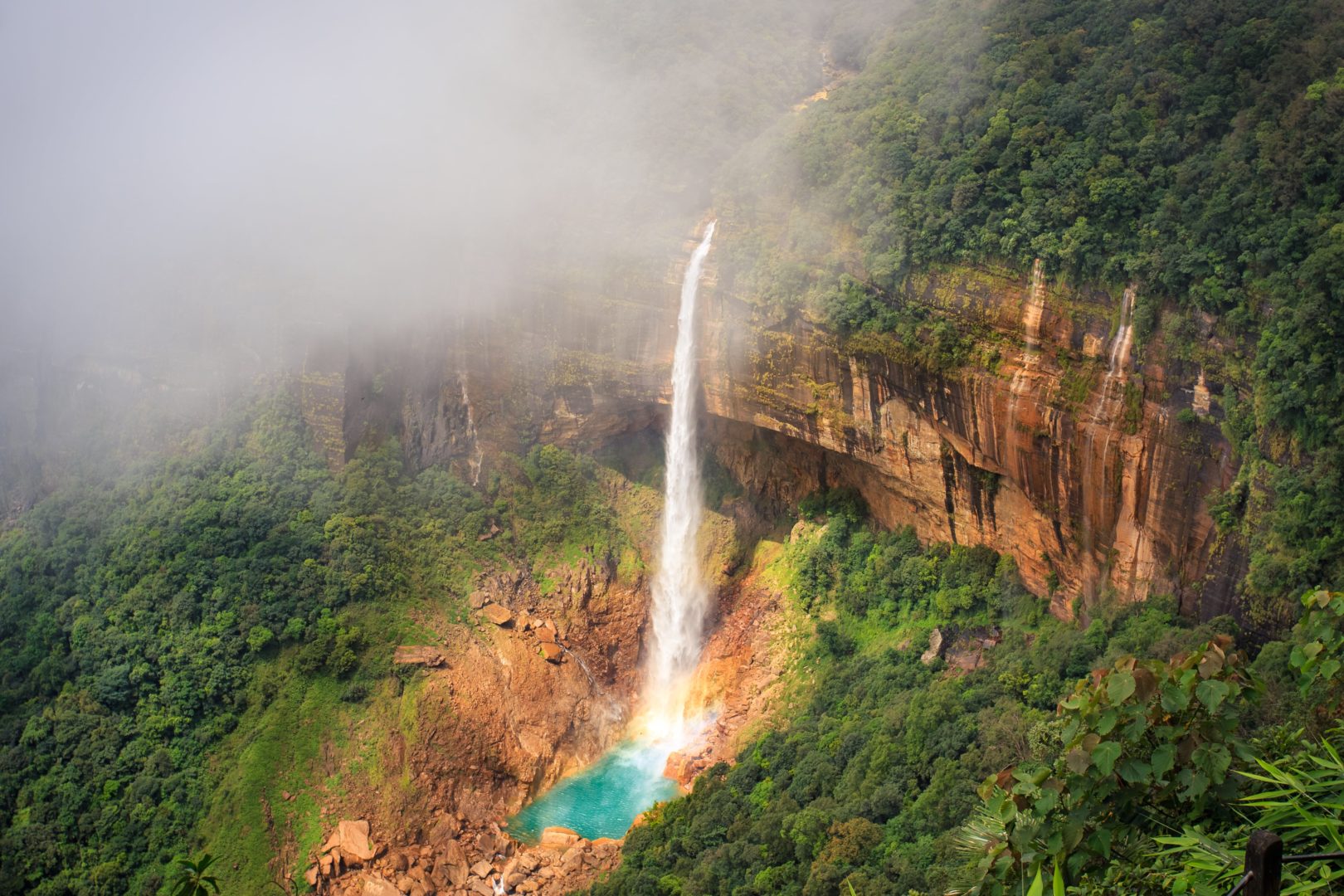 The belief in the practice of black magic, witchcraft, and the conjuring of evil spirits is prevalent in the Khasi Land. The mysticism of the forest is a part of their being and folklore. Somewhere between Sohra and Mawsahew, there lived an enormous evil snake, that used to swallow and eat people whole, if any unfortunate should used to venture that part of the forest. The number of men this snake ate was innumerable. The story spread and one day, the desperate and courageous villagers, gathered and hunted down the snake. The snake shirked and rustled itself to the ground, and swore vengeance to the villagers before it was chopped to pieces and eaten. One village lady kept a small piece of the meat for her son but forgot to serve it to him on the same day. She remembered it a few days later and asked him to have it. But to their shock, the piece of meat had grown into a small snake now. They decided to burn it but were mesmerized by the magic of the creature when it started speaking in human voice. The snake offered to make them rich if they would feed him human blood once a year. They gave in to the greed, and villagers started disappearing from time to time. It is believed that the more the deceased suffered during death, the richer the keepers become. It is believed that the serpent is still alive in the forest and seeks Khasi blood. 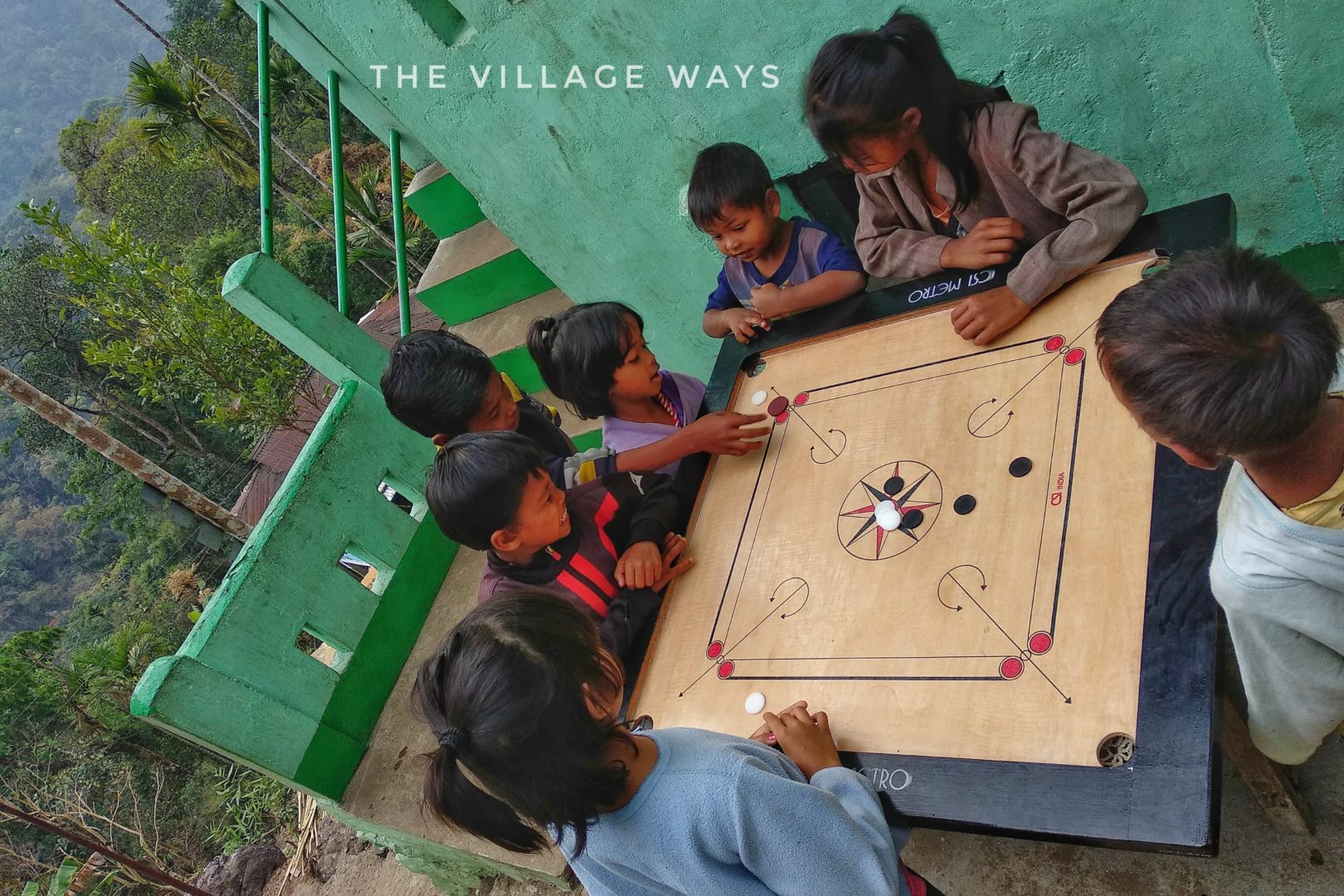 It would be right to say that Nongriat valley has a microclimate of its own. As compared to Sohra (Cherapunjee), which is higher up on the plateau, Nongriat has a much balance climate. It is not as cold as Sohra as it is about 1,000 meters below, and the cool breeze flows through the three rivers and forest of the valley during the summer season. Clean water and the thick rainforest make it an ideal place for some relaxed time. The valley is abode to eight bridges and a cave not fully explored till date. The Double-Decker Root Bridge is the start attraction, but one of the most amazing places in the valley is Rainbow waterfall. The hike to the falls itself is awe-inspiring as you cross the numerous natural pools, root bridges, and few suspension bridges. The village is rich with culture and heritage, with a sense of living in a time period not yet adulterated by society. 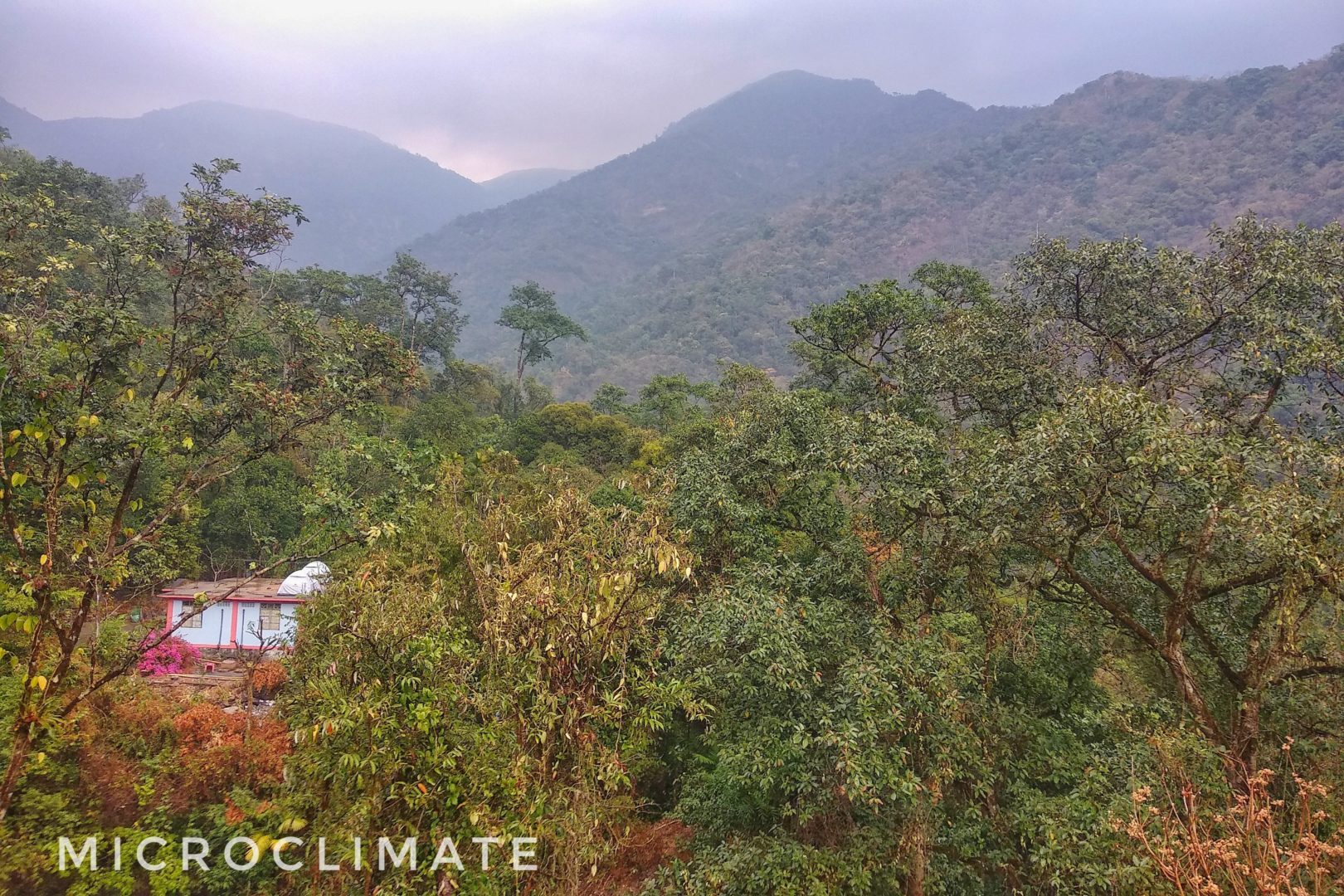 How to reach there 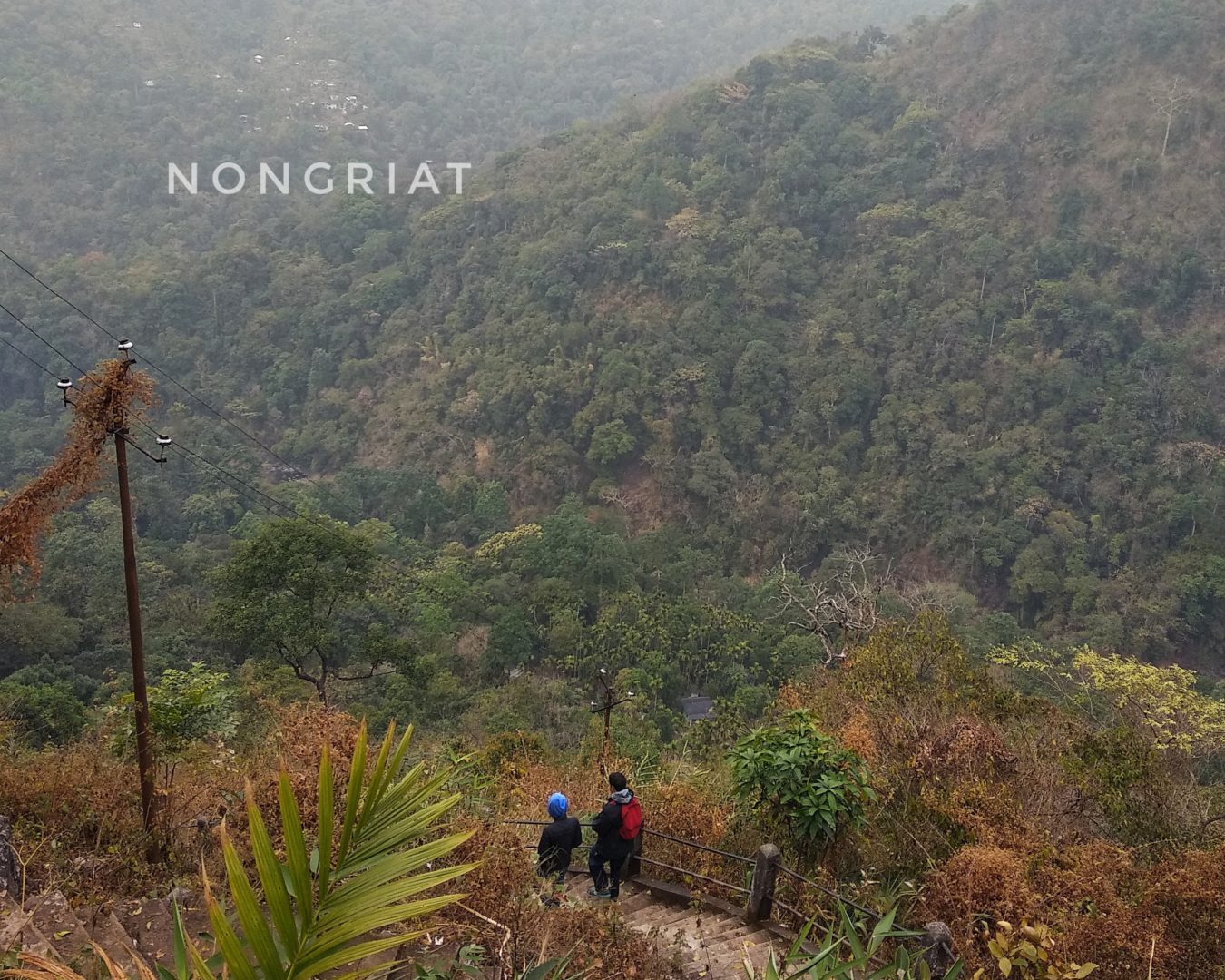 prices of cialis generic tadalafil side effects of cialis

When I initially commented I clicked the “Notify me when new comments are added” checkbox and now each time a comment is added I get several e-mails with the same comment. Is there any way you can remove people from that service? Thanks a lot!

Wow that was strange. I just wrote an incredibly long comment but after I clicked submit my comment didn’t show up. Grrrr… well I’m not writing all that over again. Regardless, just wanted to say great blog!

how to get viagra http://viagrastm.com/ viagra otc porrayah

generic name for viagra http://viagrastm.online/ how much will generic viagra cost efclihgk

Ne’er knew this, appreciate it for letting me know.

How to change the preferences on a secondary Tumblr blog?

cialis money order kykszbxd http://edcheapgeneric.online/ how much does cialis cost at walmart

viagra cost per pill https://edcheapgeneric.com/ coxttied how much does viagra cost

cialis without a doctor’s prescription kunoqqww http://tadedmedz.com/ prices of cialis

I really like your writing style, excellent info , thankyou for posting : D.

you are truly a excellent webmaster. The website loading pace is amazing.
It seems that you’re doing any unique trick. Moreover,
The contents are masterpiece. you have performed a fantastic task
in this topic!

Fantastic post but I was wanting to know if you could write
a litte more on this topic? I’d be very thankful if you could elaborate a little bit more.
Thank you!

You are my breathing in, I own few blogs and occasionally run out from brand :). “Analyzing humor is like dissecting a frog. Few people are interested and the frog dies of it.” by E. B. White.

cialis walmart generic cialis pill what does cialis 5 mg do

Good material. Many thanks.. https://kamagrajellynow.com

I read this article completely regarding the difference of hottest and earlier
technologies, it’s awesome article.