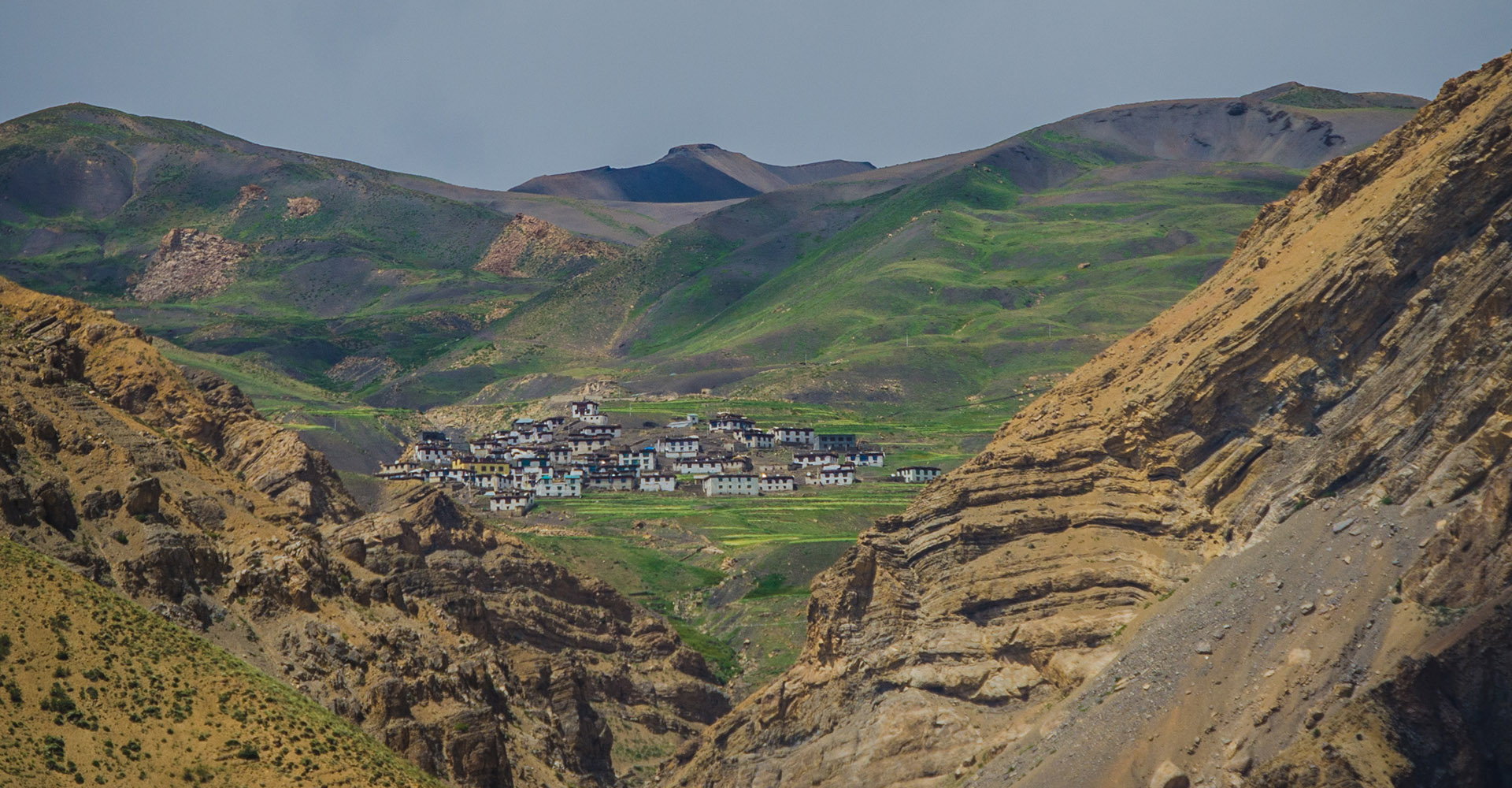 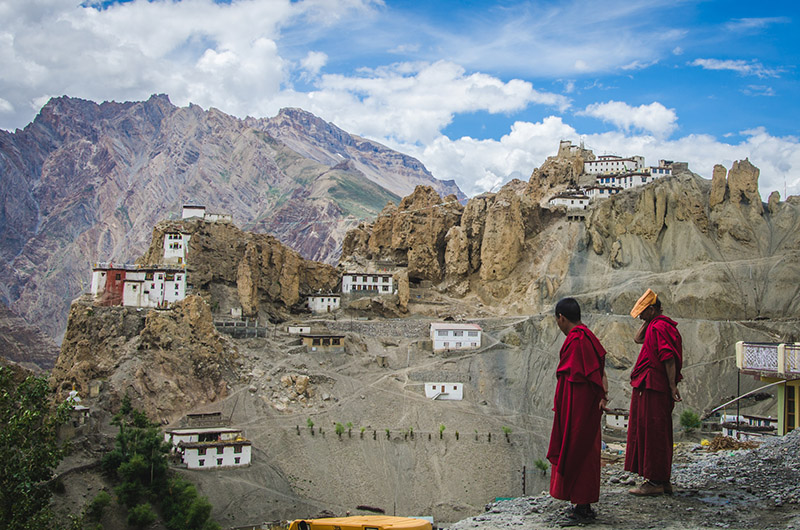 Travelling through Spiti is the closest you could get to Shangri-La, albeit on some inspiring tarmac. While you’re certainly not going to be allowed forty winks on the Dalai Lama’s bed, used on his visits here, Spiti offers much more than monasteries and pristine glaciers. Impressive decorations signal the onset of festivals here in Spiti, offering an easy excuse for much song and revelry throughout the year. If you’re lucky enough to be in Spiti at the end of September, check out the ‘Chakhar Mela’ (held every three years) that ends with the Chham dance (mask) by the Lamas. With pristine lakes and some of the worlds’ highest inhabited villages, Spiti leaves you with picture-postcard memories of barren desert and precariously perched monasteries set against a backdrop of clear blue skies. Sparse population and awesome trekking opportunities offer a feeling of unexplored remoteness in an area yet untouched by tourism. At incredible altitudes with stunning landscape, often compared to Ladakh before tourists took over, Spiti makes a fantastic road-trip destination with the added bonus of spotting that ever-elusive Snow Leopard.

Places to visit in Spiti 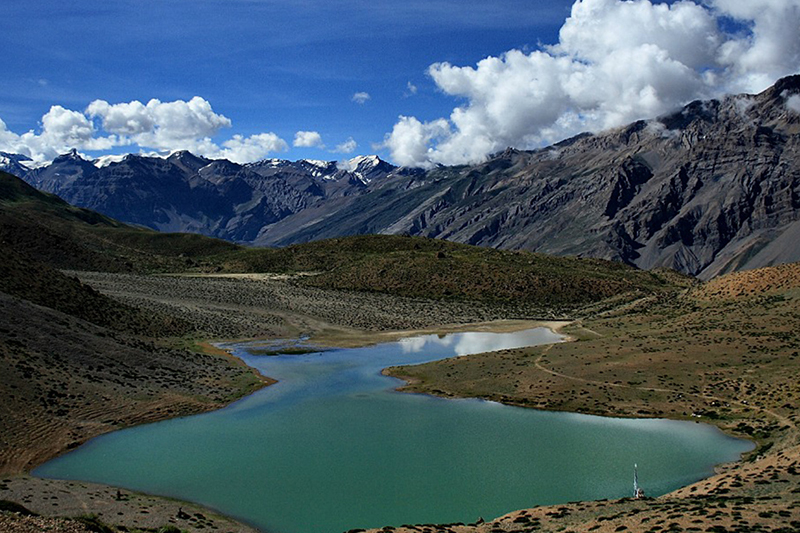 The old monastery of Dhankar built with mud and earth stands outlined against clear blue skies. A brief visit with lamas at the monastery later, begins a steep 3-kilometer hike uphill through barren hills with magnificent views of snow-capped peaks to the Dhankar Lake. Practically a vertical hike with loads of loose pebbles on the sandy overlay, a walking stick might make your hike easier. Spectacular views of the Spiti-Pin river confluence make this hike all the more memorable. Crystal clear waters of Dhankar Lake amidst the barren mountains mark your destination. The Manerang peak at a towering 6700 meters can be seen
from the lake. 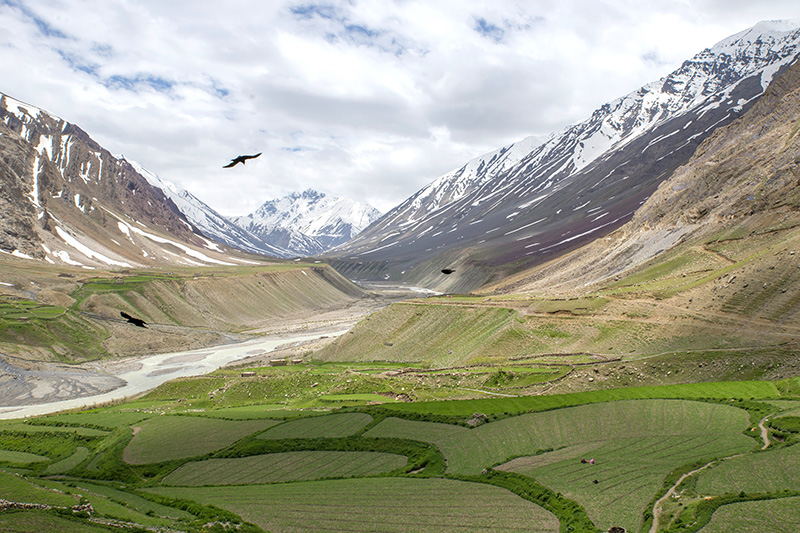 With fascinating Tibetan culture visible throughout the valley, this area is renowned as home to the last surviving Buchen Lamas from Buddhism’s oldest Nyingmapa Sect. Drop-in at Kungri monastery in Sangam to visit the mystic lamas, and if you’re lucky enough to be visiting at the right time, you just might witness the ‘Buchen lama dance’ that drives evil out of village homes. Spend some time at the last village at the end of the valley, Mudh, where green fields, glaciers, and waterfalls dominate the landscape. Lasting impressions of stunning landscape with the myriad hues of a fascinating locale – Pin Valley leaves you with memories for a lifetime.

With fascinating Tibetan culture visible throughout the valley, this area is renowned as home to the last surviving Buchen Lamas from Buddhism’s oldest Nyingmapa Sect. Drop-in at Kungri monastery in Sangam to visit the mystic lamas, and if you’re lucky enough to be visiting at the right time, you just might witness the ‘Buchen lama dance’ that drives evil out of village homes. Spend some time at the last village at the end of the valley, Mudh, where green fields, glaciers, and waterfalls dominate the landscape. Lasting impressions of stunning landscape with the myriad hues of a fascinating locale – Pin Valley leaves you with memories for a lifetime.

3. Visit some of the Highest Villages in the World 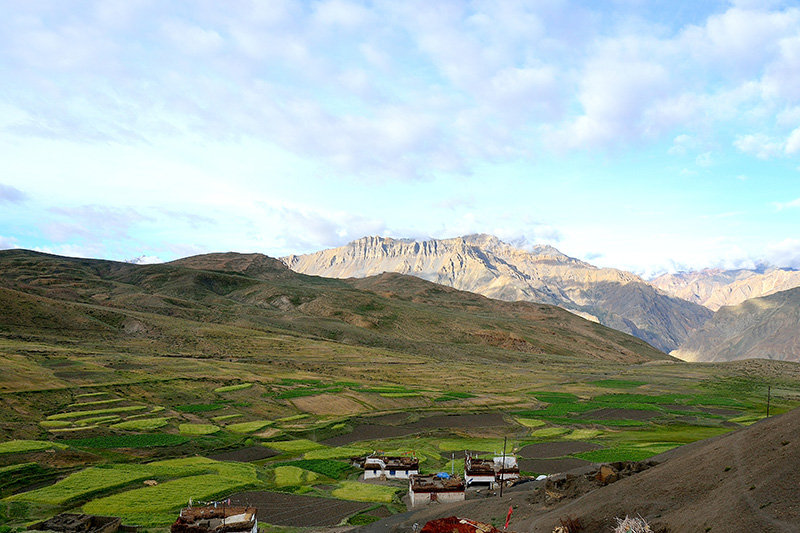 The drive from Kaza takes you through barren mountains set against bright blue skies with patches of lovely green farmland in summer. Your first stop, at some of the highest inhabited villages in the world, is Langza. Renowned for its unbeatable location, Langza offers some of Spiti’s finest views with unclaimed fossils lying around its outskirts. Spectacular views of the ChauChau Kang Nilda peak at 4400 meters above mean sea level with isolated slopes make Langza the destination of choice. Think twice if you want to displace those ancient fossils if you do find one though.

Stop for a moment in Hikkim for a cuppa with the postmaster of the highest post office in the world. Don’t forget to post a couple of postcards before you head on to Komic. Appearing, seemingly out of nowhere, Komic is the Himalaya’s highest inhabited village. With a little over a dozen households, expect to be greeted with cups of hot tea from charming families that live here. Sitting pretty at 4587 meters above mean sea level, Komic offers stunning vistas from its ancient monastery as well. 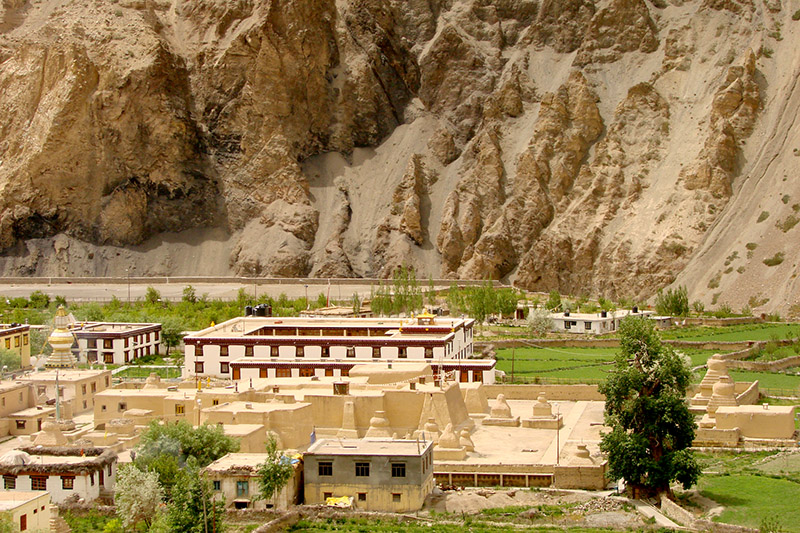 Gently fluttering prayer flags against a backdrop of green farmland (in summer), surrounded by barren mountains and clear blue skies, mark the entrance to Tabo.

Over 1000 years old, Tabo Monastery is now a UNESCO Heritage site and one of the finest marvels of Indo-Tibetian art. Temple complexes of sturdy mud walls mark the uniqueness of Tabo Monastery complete with impressive murals inside. Take a short hike to Tabo caves to feel the general aura of peace that surrounds these meditation grounds as well. Head to the quaint hamlet of Gue. Fascinating legends are so much a part of Spiti’s landscape that you tend to expect one at every turn. The ‘mummy of Gue’, however, is probably the only one you will actually physically see on your visit here. The 500-year-old ‘mummified’ body of a Tibetian lama is housed in Gue. A fairly gruesome sight, you can still see the hair on the mummy’s head if you look close enough. See it to believe it!

Precariously perched on a rugged cliff, Dhankar seems almost fragile from a distance. Getting closer, however, gives you a fair idea of why so much effort must have been spent building this over a thousand years ago. Spectacular views of the Spiti-Pin river confluence and the valley below leave meditation spots like none other here in this mud-walled monastery. Take a quick look at the little museum in the Gompa here before you spend some time in conversation with the lamas for more history and lore of the Dhankar Monastery. 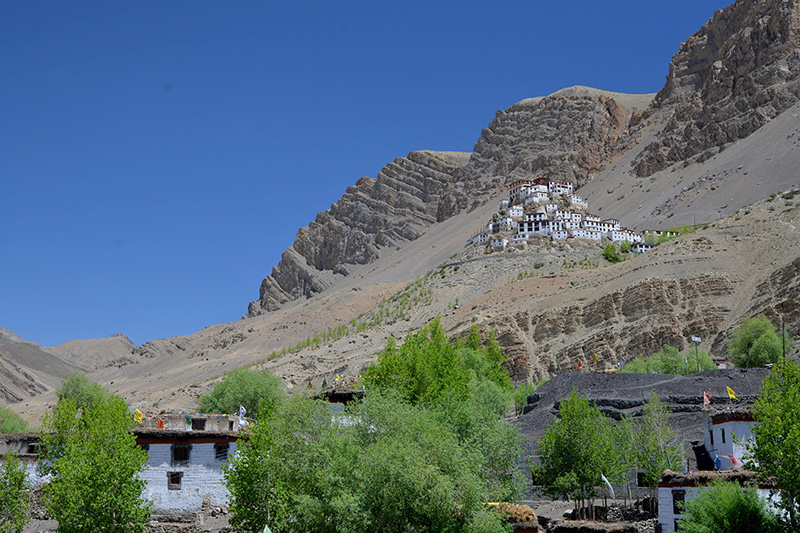 En route to Kibber village from Kaza, fascinatingly perched on a rugged ridge overlooking Spiti river, Kye monastery in Spiti Valley’s biggest monastery. Easily the most photographed, it is home to over 300 lamas, the monastery dates back to nearly 1000 AD (second oldest to Tabo Monastery). Butter lamps, lit every evening, add to the aura of peace and tranquillity that ancient murals and paintings offer here. Photography is allowed only on the roof of the monastery, so get a couple of good pictures before you step in.

Quaint white houses with bright red rooftops mark your welcome to Kibber village. At over 4200 meters above MSL, Kibber is one of Spiti’s highest inhabited villages with inhabitants all year-round. Expect a fair share of homestays in Kibber where tourism does help the local community along with agriculture in some of Spiti’s most fertile lands. When here, take the ropeway over a deep gorge over to the Chicham village from Kibber. Around August and September, peas dominate the fields of Kibber. 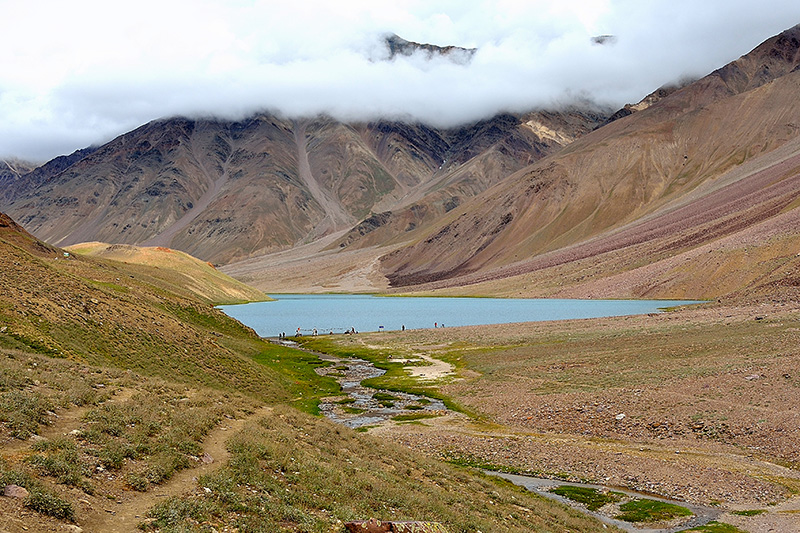 At 4551 meters, Kunzum Pass is the main access to Spiti Valley from Lahaul. A little over 3 hours would take you, on
some tricky rocky roads, to Kunzum Pass from Kaza. Hike down from the towering pass to the surreal Chandrataal Lake. Spend some time by the ‘moon lake’, as it’s popularly known, and watch it turn different shades of turquoise blue as the morning progresses. Apparently, the site where Yudishtra (eldest Pandava from the Mahabharata) was taken to heaven, Chandrataal is surrounded by legends and folklore about its origins.

Between late June and mid-September, high snow-bound passes remain open and temperatures are pleasant enough for a couple of hours without a sweater. The beautiful villages of Kibber, Langza, and Komic are at their best and the fields are a pretty shade of green.
Expect regular snowfall intervals by the end of October right through to March. Winters, however, is harsh with most places inaccessible thanks to abundant snow. Spiti becomes inaccessible from the Manali side but the road through Kinnaur remains open through most parts of the year. Chandrataal becomes inaccessible from both sides as the high passes are snowed under.

Don’t worry about over-packing woolens, there’s always another layer you might need at night here.
• Good comfortable walking shoes and a spare pair of hiking boots.
• Warm sweaters and thick jackets are the bare minimum you’d need here with gloves, long johns, and a balaclava in winter.
• A backpack and water bottle for day trips
• Sunscreen and sunglasses, simply because you’re closer to the sun
• Pens, sketch pens, and other stationery to hand out to children in local villages.

Dharamshala/Mcleodganj – Home of the Tibetan Government in Exile