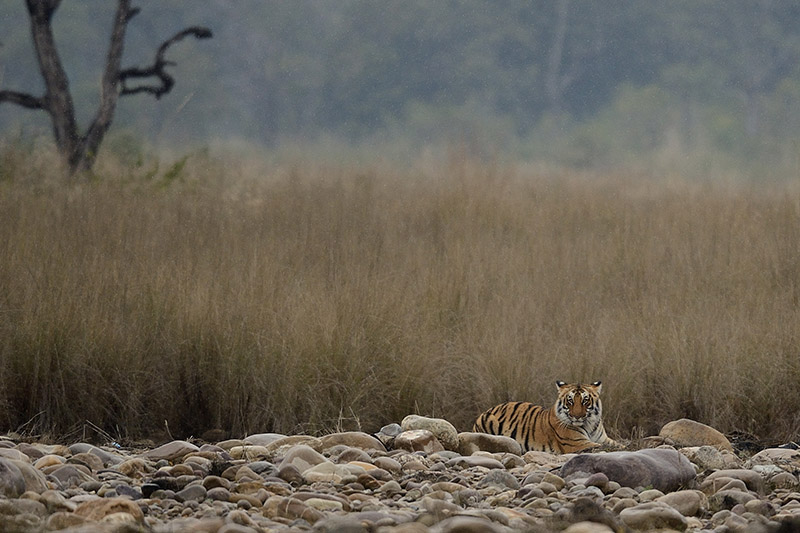 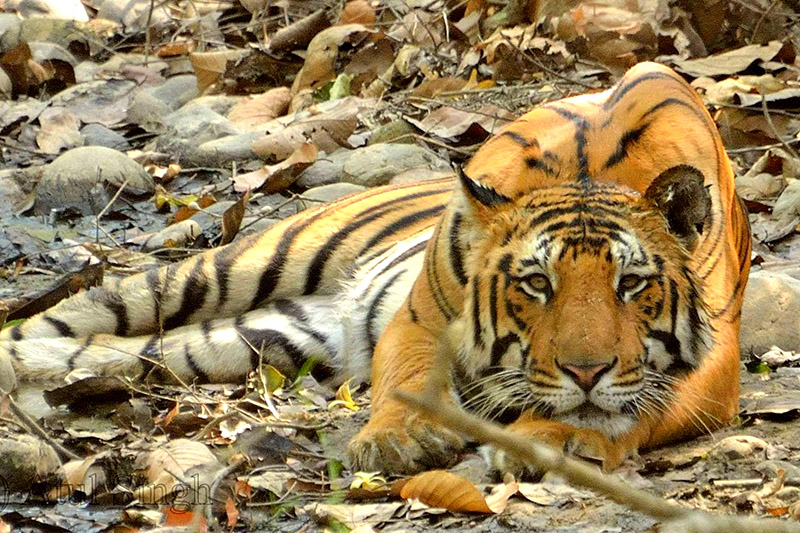 India’s first national park, established in 1936. The place where Project Tiger was launched in 1973 to protect the endangered wildlife species in the country. Corbett National Park, located at an altitude of 600 to 1100 metres in the western Himalayan districts of Nainital and Pauri Garhwal in Uttarakhand, is counted among the best wildlife sanctuaries in the world.

Did you know that it was originally called Hailey National Park and later renamed Ramganga National Park in 1952? Eventually, in 1957, the place got named after Jim Corbett, the renowned conservationist and naturalist, who hunted down tigers turned man-eaters in Kumaon, Uttarakhand.

Corbett National Park (520 sq. km) is part of the larger Corbett Tiger Reserve, which covers an area of 1318.54 sq.km that also includes the Sonanadi Wildlife Sanctuary. Home to the Royal Bengal Tiger, Asiatic Elephant, Leopard, Wild Boar, Sloth Bear, Jackal, Mongoose, Crocodile and about 50 species of mammals as well as 600 species of birds, the place is a must-visit for wildlife enthusiasts, photographers, nature lovers and curious travellers.

The icing on the cake is that Corbett National Park is among the few tiger reserves in the country that permit overnight stays inside the park. So, what are you waiting for? Here’s everything you need to know before packing your travel bags:

Considered among the major attractions of the national park, there are more than 25 species of reptiles residing here. So, get ready to be amazed by the rare fish-eating, long-nosed Gharial Crocodile, Mugger crocodile, Indian Python, Russell’s viper, King Cobra, Krait, Monitor Lizard, and the sheer variety of turtles and tortoise in the area.

At Corbett National Park, you can easily spend an entire day doing nothing, but watching birds! After all, there are about 600 species of avifauna to explore. While popular species like Peacocks, Doves, Eagles, Owls and Kingfishers may be easy to identify, others like the Black-Necked Stork, Spur-Winged Lapwings, Graylag Geese, Tailor Bird, and Large Pied Wagtail call for expert eyes.

Corbett National Park is divided into five zones, each with its own distinctive charm:

Open to tourists from 1st October to 30th June, the entry gate to Bijrani Zone is barely one km from Ramnagar city. The chances of spotting a Bengal tiger here are considered to be rather high, given its strategic location and topography. The other likely sightings include leopards, wild elephants, black bears Chital, Sambar and Hog Deer.

Bijrani is among the only two zones in Corbett National Park where elephant safaris are available. Also, the forest rest house here offers accommodation for the night.

Open through the year for visitors, JhirnaGate is located at 16 km from Ramnagar city. The popular sightings here include tiger, wild bear, sloth bear, deer, Chital, Nilgai and elephants. That apart, Jhirna Zone is considered an excellent spot for bird watching. It also offers night stay for wildlife enthusiasts at its forest rest house.

The newest eco-tourism zone in Corbett National Park, Dhela Zone is open for tourists throughout the year. It’s located at distance of 13 km from Ramnagar city, and considered among the best birding zones in the park. Apart from the Royal Bengal tiger, leopards, wild elephants, Nilgai, wild bears and various species of reptiles are spotted here.

The largest and most varied zone in Corbett National Park, the Dhikala Zone is open for visitors from 15th November to 15th June. The entry gate is 18 km from Ramnagar city.

Considered the finest zone for tiger sighting, Dhikala is also a good place to spot Cheetahs, Spotted Deer, Wild pigs, Hog Deer and Barking Deer. Elephant and canter safaris are the two safari options available here. If you are a wildlife enthusiast, overnight stay at the forest rest house within the zone is recommended.

Open to visitors from 15th November to 15th June, Durga Devi Zone is known for its hilly topography and woody vegetation that makes it a birdwatcher’s paradise. The entry gate is located at a distance of 36 km from Ramnagar city.

For those who enjoy angling, Durga Devi Zone offers a special treat – the popular Mahasheer fishes. And then, there are jeep safaris for sightings of Tigers, Leopards, and Otters. With prior booking, overnight stays are permitted.

A jeep safari is a popular option when it comes to exploring Corbett National Park. All ecotourism zones of the park permit jeep safaris, except the Dhikala Zone. Visitors can opt for a canter safari at Dhikala zone; for those who have made overnight bookings for the forest rest house, an elephant safari is also an exciting option.

Elephant safaris are only permitted in Bijrani and Dhikala Zones. While day visitors can avail of the elephant ride at Bijrani Zone, at Dhikala only tourists residing at the forest rest house can avail of the option.

Please note: There are no elephant safaris on Mondays, as it is the rest day for elephants.

In the monsoons (July-September), most zones of the Corbett National Park are closed for visitors. Safaris timings at the Jhirna and Dhela Zones are subject to weather conditions.

For those who prefer travelling by train, Ramnagar (15 km) is the nearest railway station and is well-connected to places like Delhi and Nainital (62 km).

For road travel, visitors can opt for a private taxi or state-owned direct buses that ply regularly from Delhi, Nainital, Lucknow (436 km) and Dehradun (232 km).

The different zones in the park have somewhat dissimilar opening and closing dates. The timings are as follows:
Jhirna Zone – Throughout the year
Dhikala Zone – November 15 to June 15
Bijrani Zone – October 01 to June 30
Sonanadi Zone – Throughout the year
Durga Devi Zone – November 15 to June 15
November to March is the peak period and tourists visit Corbett in throngs. Bird Watchers will love it during the months of November up to February. The monsoon has passed and the park is all green and full of life. Many migratory birds visit the park. March to May dries up the vegetation and it is much easier to spot wildlife especially the big cat. Though the months of April to June get unbearably hot, one gets some of the best sightings of wildlife and that includes spotting of the tiger as well.

There are three distinct seasons when you can visit Corbett – Right after the rains when it’s all green, the winters and the hot and dry summers. You need to pack your bag according to the season.
•The days are quite pleasant post monsoon and you can pack light. Winters call for extra layers as it gets pretty chilly. The summers call for light, breathable clothing.
•Sunscreen and Sunglasses are a must. Wide brim hats with straps protect you from the sun and stay on your head when the wind catches up.
•Pack those binoculars if you want to get up close to some real-life action.
•Hiking trousers and shoes and a safari jacket should see you through the day comfortably. Carry your windcheater and umbrella as a first barrier to the drizzle.
•Insect repellents would be quite helpful at night to ward off the annoying mosquitoes and bugs.
• A power bank would come in handy if you are staying inside one of the forest rest houses.

Best places to stay in Corbett 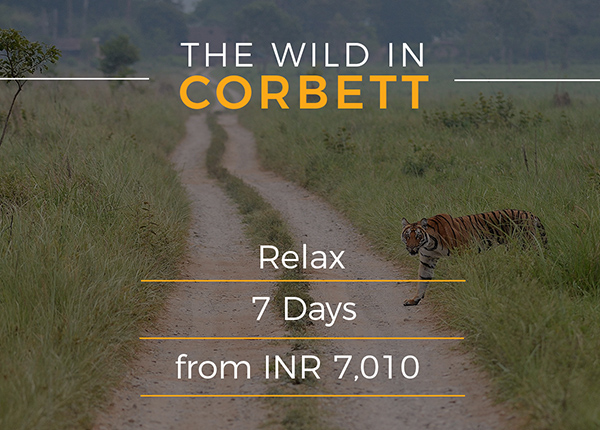 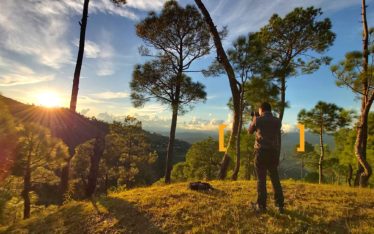