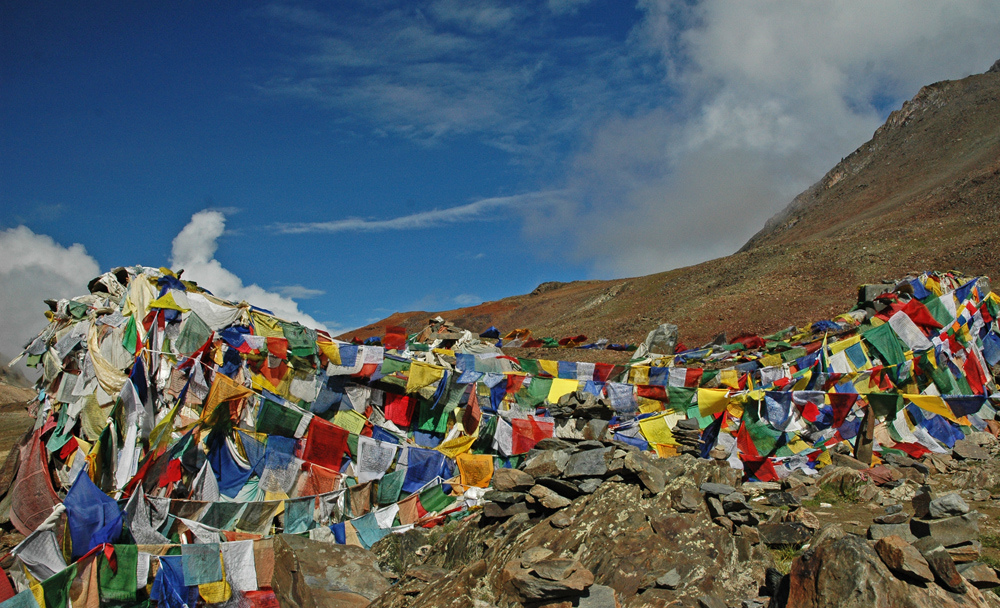 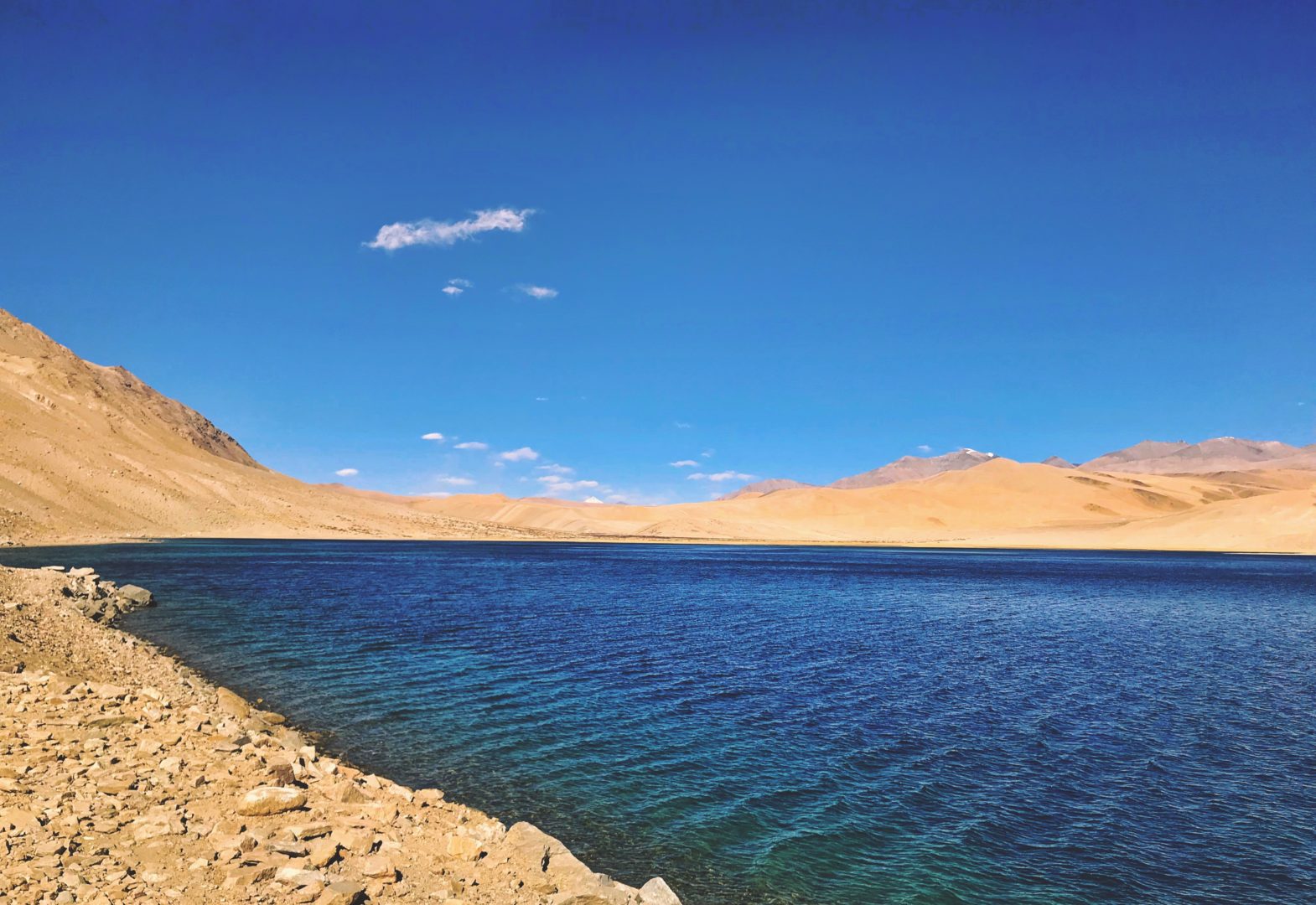 It is hard to take your eyes and heart off the pristine terrain of Leh Ladakh, one of the few remaining Buddhist destinations in South Asia. Explore an altogether unique feeling of being close to nature experiencing the calmness and placidity of the mountains, rivers and valleys. With austere monasteries and palaces, the scenes of Leh Ladakh are is as apparently ageless and perpetual as the mountains that surround it. You can also completely National Geographic, watching the varied species of birds and animals that you will only see in mountains. The beauty of Ladakh had also been one of the prized shooting destinations of blockbuster Bollywood flicks. It’s time to see them all and take the road less taken-the ideal Ladakh itinerary! 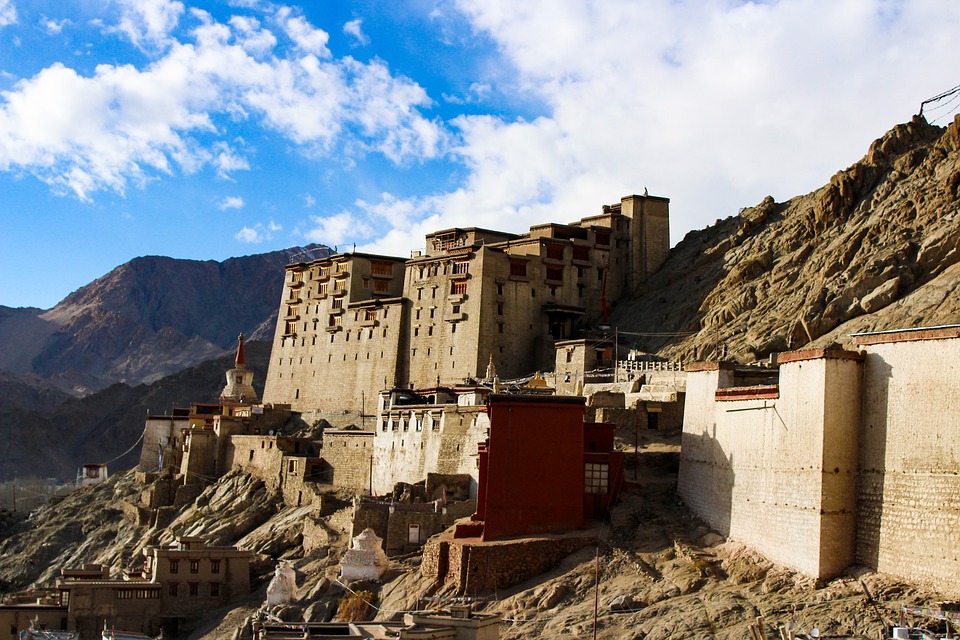 Leh is a town like no other, anywhere. Imagine this–Numbingly cold, surrounded by insanely beautiful snow-capped mountains, valleys, glaciers, peaks and rivers. This is Leh. Leh (La Leh Land as some would love to call) is an enchanting land and venturing out into Leh and its surrounding area is itself a good part of the fun of being here.  Navigate the winding lanes of the old town, and negotiate a slightly rocky uphill walk to get to the gates of Royal Leh Palace. If you are in Leh, there is no chance of missing this beautiful specimen of medieval Tibetan temple architecture. A nine-storey structure, built mostly out of soil, rocks and wood, rewards by an unobstructed panoramic view of the ravishing town, and all the spectacular sights of Stok Kangri and the Ladakh mountain range. Grab your suitable holiday package from un[travel]’s Ladakh Tour Packages and go offbeat in Ladakh. Soak in the splendor that it once was; you get to see the restored the valuable ruins of the palace, the old pictures and paintings including Tibetan thangka. No trip to Leh can be complete without browsing the Leh Main Market–a vibrant spot in the middle of Leh town. The Market sells unique Tibetan antiques, local handcrafted carpets, rugs and pashmina shawls, tribal jewellery, and organic products. Stroll around the dusty streets of the old town, catch the stunning Shanti stupa. It is aptly named; this white-dome structure jutting out of a rocky ridge provides a little oasis of serenity, peacefulness and exotic views.

Confluence of everything serene 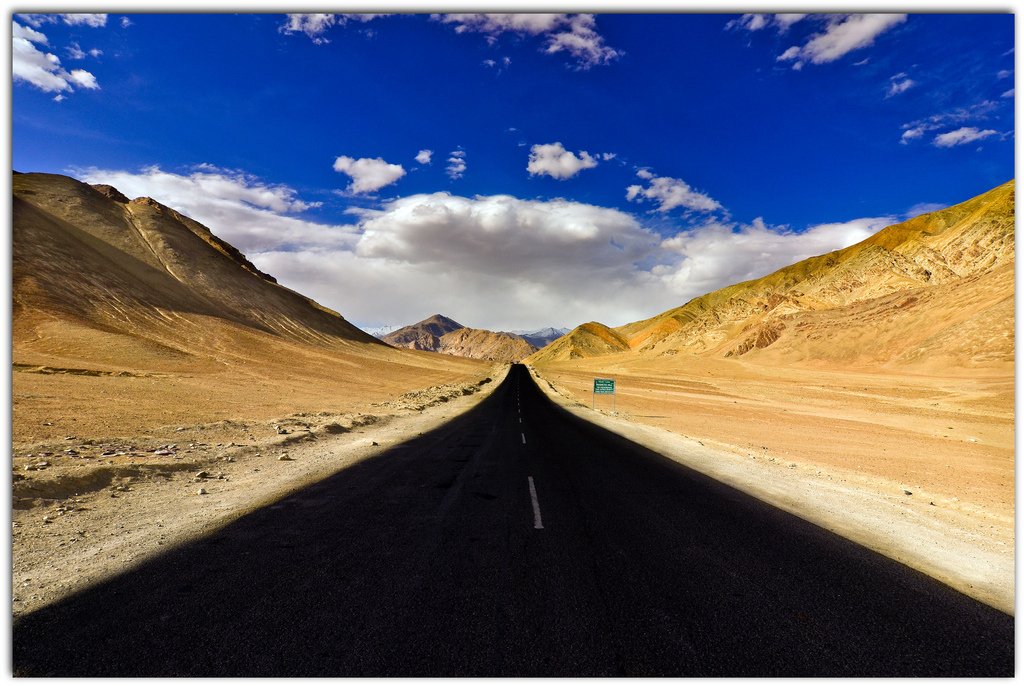 Sangam means Confluence (where two rivers meet each other). It’s a peaceful place where you can enjoy the river banks of Indus and relax amidst beautiful surroundings. The tranquility and serenity is matchless. The upstream eight kilometers is the main rapid rafting area. A little further, there finds the Magnetic Hill-the Hill that pulls your vehicle upwards, questioning the very existence of gravity. Some say it’s a mystery, some say clear optical illusion, and we leave it to you to ponder over. Newton, take a look! The monastic jewel of Ladakh, the wonderful three-storey Alichi Monastery dates back to nearly one thousand years, have lovely painting of thousand miniature Buddhas, four armed figurines of Bodhisattvas, and statue of Maitreya . The flea market just outside the monastery only added to its charm. Gurudwara Pathar Sahib is another interesting place, maintained today by the Indian Army today. It’s customary to stop and pay obeisance at the temple. And there is the Hall of Fame, a museum erected by the Indian army in memory of the brave soldiers who lost their lives in the Indo-Pak wars 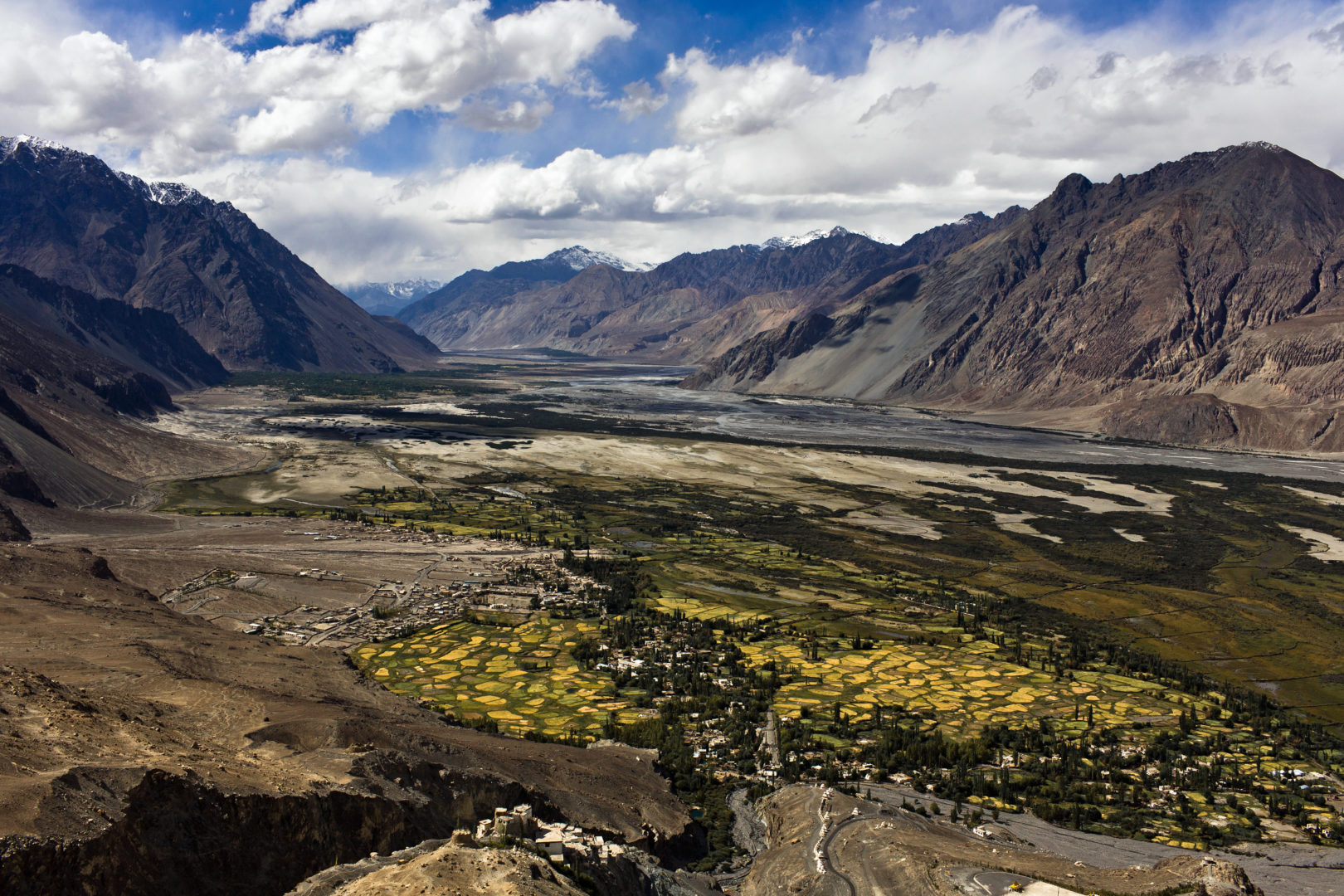 It’s time to dash off, to Nubra (Hundar) Valley, located at a distance of about 140 kilometers from Leh. The main road access to the Nubra Valley is over Khardung La pass. Nubra Valley is aptly called the Orchard of Ladakh for its much touted orchards, scenic vistas, Bactrian camels and monasteries. The whole valley wears the colour of white during winters. Rise early for a scenic drive to Nubra Valley via Khardung La to the sand dunes of Hunder. Precariously perched higher up, this 14th century Diskit Monastery is home to over 100 Yellow Hat, Gelupa monks. Step out for stunning views of the Shyok River and the floodplains below, with the sand dunes of Hunder beyond. Bactrian Camels (the rare twin humped camels) are an ungulate variety of camel to find in Nubra Valley. Get a camel to strike a pose!

The last village on Indo-Pak border 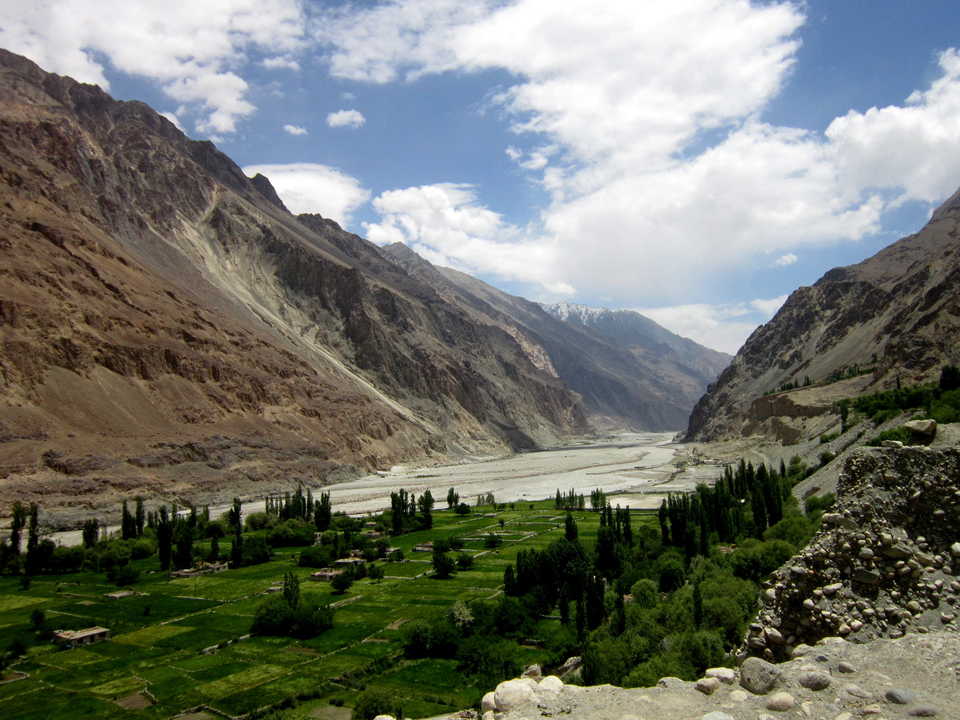 Turtuk is a few hours in the vehicle beyond Hundar, arguably the most beautiful village in the Nubra Valley. Turtuk is the last Indian outpost before Pakistan. Abundance of flora, especially in the form of apricot farms, makes it the greenest place in the region. Hovering over Turtuk’s 300-odd houses is the Karakoram mountain range, home to K2, world’s second tallest peak. Switch off your mobiles, (There might be no network anyways) watch the nature!  Once here, biking is the best way to get around. Trek to the village and the monastery at the top. No wifi, minimal infrastructure, and the distinct local language (Balti), makes the border village retain a mystical world that one might otherwise never know existed. If you are the one who prefers distance from the hustle and humdrum of urban life, choose from our Ladakh Holiday Packages and enjoy unhurried and quiet holidays.

The Lake of changing colours 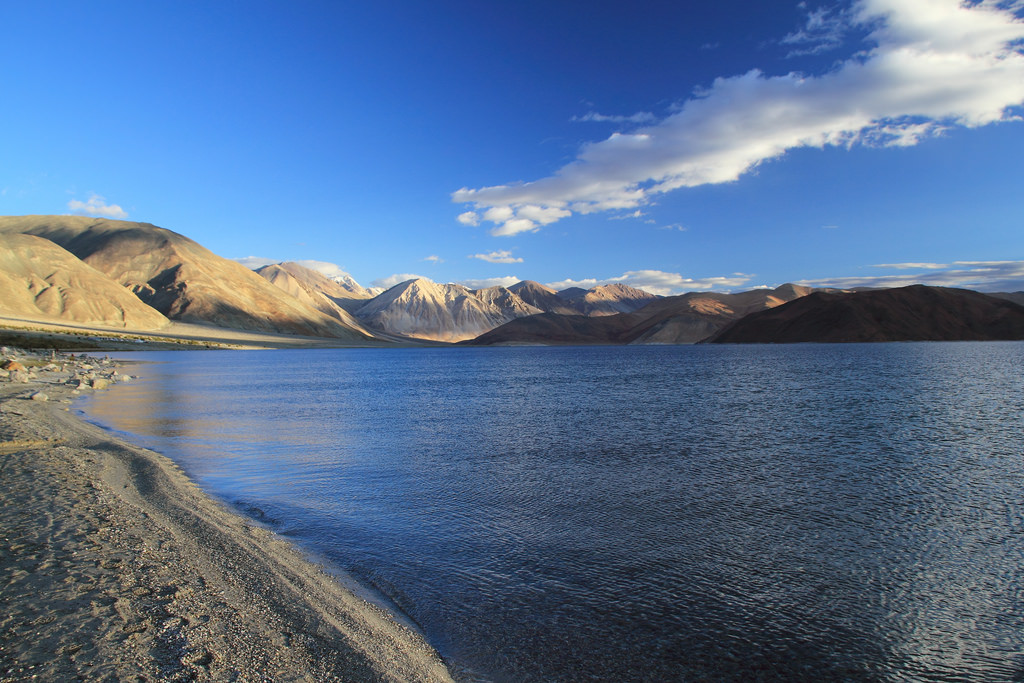 It takes around 6 hours for 175 kilometers to Pangong Tso from Nubra valley. The first glimpse of Pangong Tso always elicits gasps of awe! Its blue water is enough to leave a lasting impression on your mind. It’s at an altitude of 4,350 meters and is touted as the world’s highest saltwater lake. Its colour changes from shades of blue to green to red. The 162Kms long Lake falls on the Sino-Indian Line of Actual Control, of which 70% is in China and 30% is in India! This Enhorheic Lake completely freezes in winters despite its salty water. If that doesn’t excite you, then remember the scene from the ‘3 Idots’ movie where Kareena Kapoor goes to meet Aamir Khan riding a scooter? It was shot at the Pangong Lake. This is also some place to indulge you in stargazing. The night sky will leave you dazzled!

Hemis­–Spiritual exploration amongst the serenity of mountains 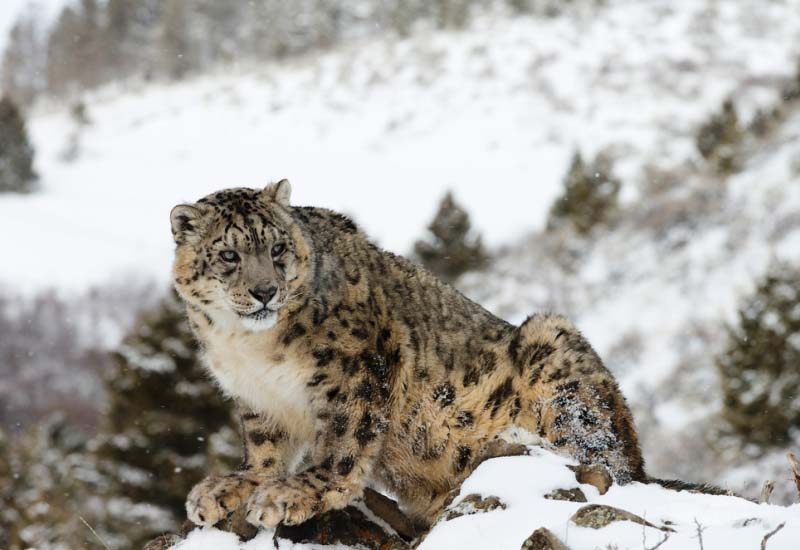 Hemis National ParkLeave Pangong and retrace the Leh route across Chang-la. Upon reaching Karu, drive across the Indus and visit the Hemis Village, known for being the host of Hemis Tsechu festival that attracts plenty of tourists across the globe. The first sight to immerse landing at the beautiful Hemins is the stunning Monastery with whitewashed walls, wood finished rooms and excellent architectural works. The Monastery belongs to the Drukpa sect of Mahayana Buddhism, and was built in the 11th century. The Monastery also hosts the Naropa Festival, held in the month of September or October, is a celebration of spirituality, dance, music, and culture. With exotic landscape and unspoilt surroundings, Hemis National Park is a tempting landscape for forest and nature walks. Indus and Zanskar Rivers flowing at its frontiers makes the Park more picturesque. Famed as the Snow Leopard Capital of India, this Park has recorded 73 varieties of bird species. Experience composure, tranquility and placidity; be at Shang Gompa, Gotsang Gompa and Stakna Gompa. 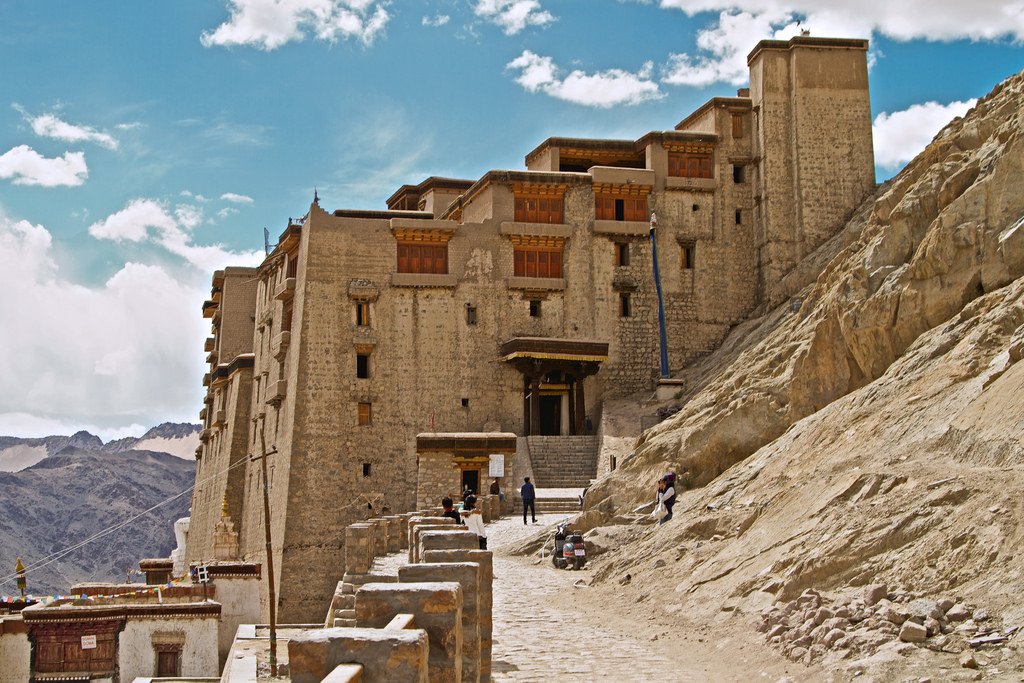 Before getting to Leh, another major sight to behold is Shey Monastery. It must be not that old, but it has some great works including a giant statue of a seated Shakyamuni Buddha and much more. The view of the Zanskar Range and Indus Valley from the Shey Monastery is stunning, by any standards. Yes, we are back to school! This is where the Aamir Khan-starrer ‘3 Idiots’ was shot- the Druk Padma Karpo School. The no miss would be the ‘Rancho Wall’, the wall where Chatur gets electrocuted while urinating, courtesy the witty kids. Sindhuguard (a place taming the mighty Indus river) is close to shey palace and on the way to Thiksey monastery from Leh. Also called as sindhu darshan point, this place is ideal for a light walk, away from the maddening bustle of city life. Take tonnes of pictures. Because getting the best picture takes a lot of effort.

Before leaving Leh, it is obligatory to shop for some truly exquisite locally made works and good variety of antiques from Main Bazaar, lined with shops and stalls selling almost everything you may require. Make sure you take a piece of Leh Ladakh home with you! Don’t forget to include the aforementioned places on your travel itinerary. You can customize your travel to Ladakh with un[travel]’s range of Ladakh Customised Holiday Packages.