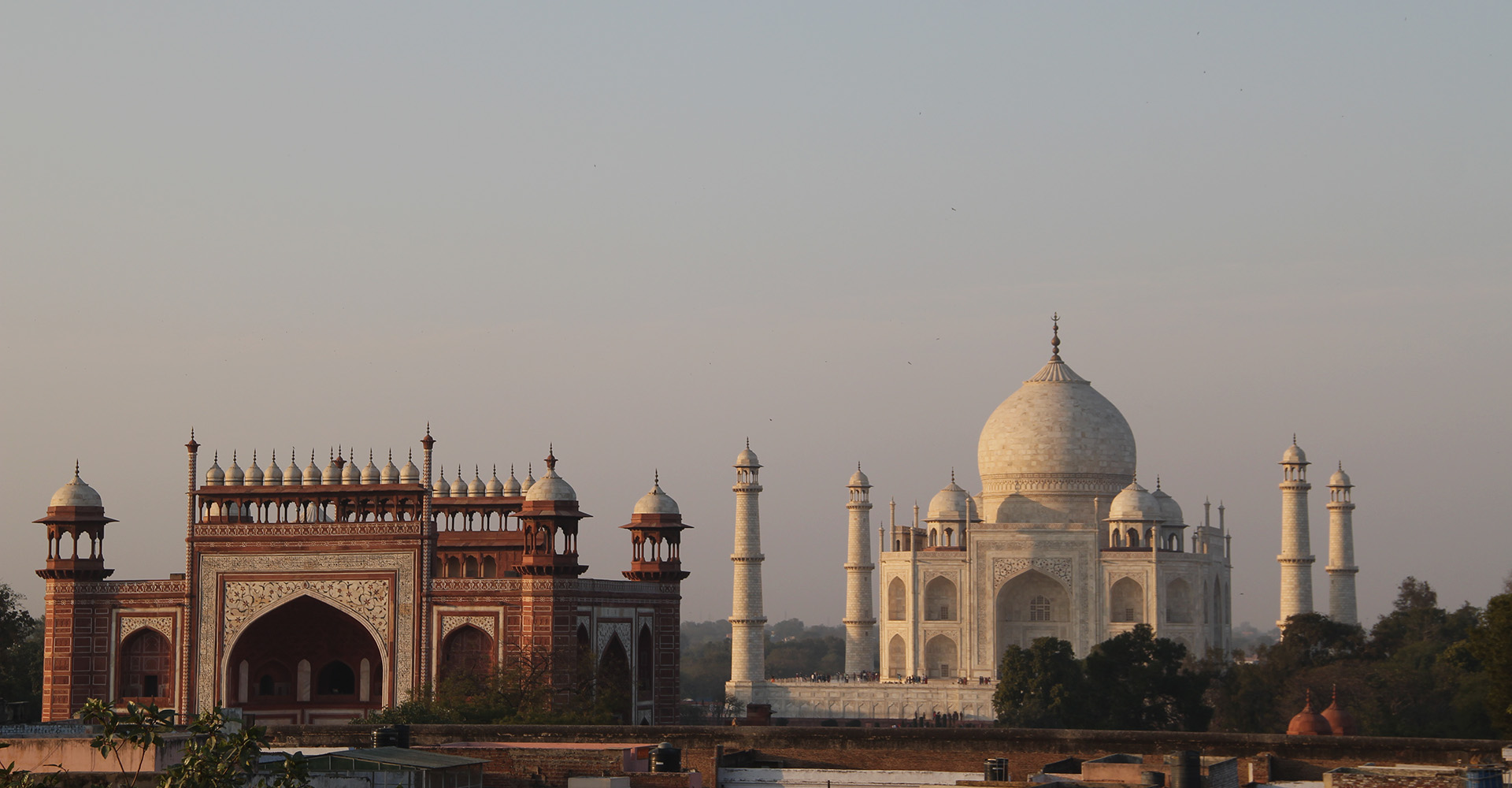 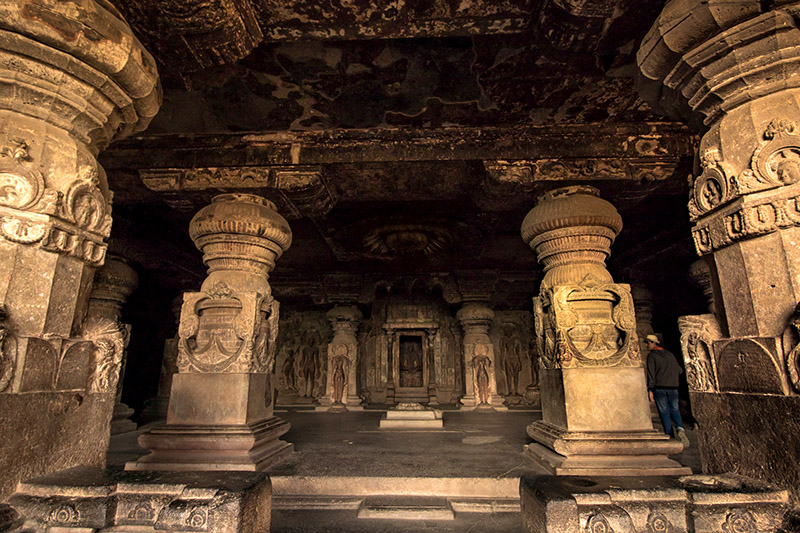 Elegant. Unique. Vibrant. Diverse. India is an amalgam of everything that these words signify and yet, so much more. Once, one of the richest empires in all the land, it became the twinkle in the eye of various colonists and conquerors. And although this led to an eventual decline in stature and resources, what remained stoic and defiant in the face of change was India’s artistic genius. A sort of architectural ingenuity which led to a plethora of masterpieces as unique and intricate in detail as they are breathtaking in beauty.

Of course, when you think of Indian architecture your mind maybe paints a picture of extravagant temples and palace ruins. Well, we’re here to tell you that India is just as diverse in its art as it is in culture and heritage. And before we delve into some of the most awe-inspiring works of Indian craftsmanship, we’ll give you a brief glimpse of our history.

Before India became the India we know today, it was a bunch of kingdoms all co-existing (for the most part) and although we had a lot of Kings who yearned to unite the land under their own singular banner, none succeeded to the point of writing home about. That was until a certain conqueror of Persian descent from Central Asia turned his attentions toward India. Thus ensued a Game of Thrones for North India between the foreigner, Babur, the Lodi Dynasty and the Rajputs. Needless to say, Babur won and borne, from his victories, was the great Mughal Empire; an empire that peaked during his grandson’s reign – Akbar. Well, that was before his descendant sold his soul to the British and the age of colonisation arose.

Along with the British, the French and the Portuguese had a significant hold of India, and this led to a blend of styles in everything from art to cuisine. And thus, a country which was renowned for its vast heritage grew in its cultural melange as well. Now, let’s get on it, shall we? 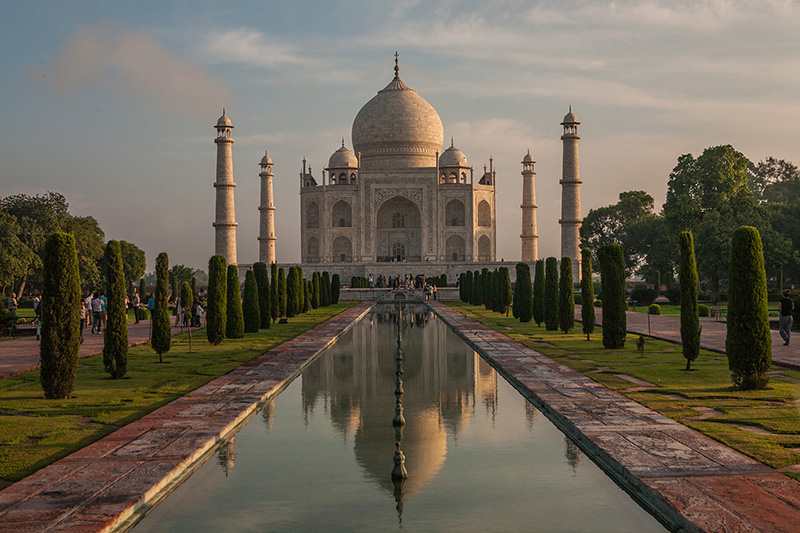 “The Taj Mahal rises above the banks of the river like a solitary tear suspended on the cheek of time.” – Rabindranath Tagore.

Might as well begin with the obvious then. This is the face of most picture postcards from India, and our representative in the list of Wonders. Built in 1648 AD, Taj Mahal is an eternal proclamation of his love and grief set in marble by the Mughal Emperor, Shah Jahan, to his wife, Mumtaz; a mausoleum of immeasurable beauty. Inspired by their story, Taj Mahal remains, to this day, one of the greatest testaments to love and its timeless bond. At the time of his death, Shah Jahan was laid to rest here as well, right next to his Mumtaz. Now you know from where we get our dramatism in cinema! 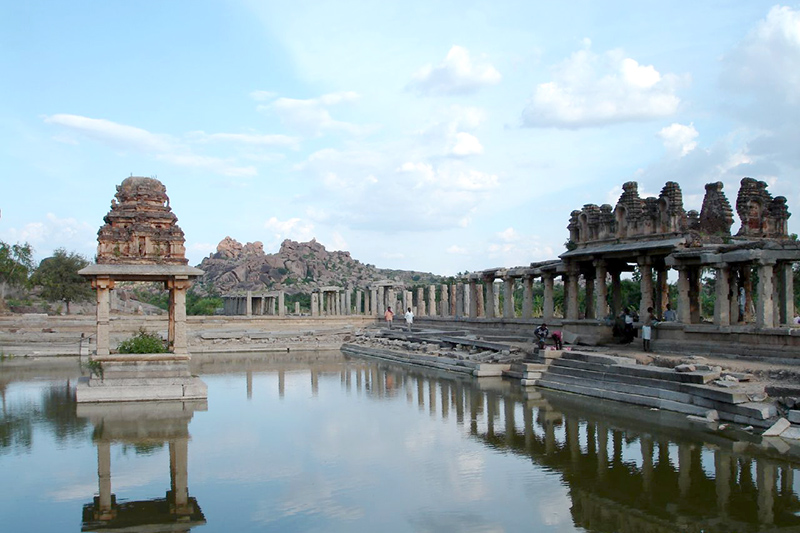 Hampi in Karnataka has long been a retreat for people from all corners of India due to its laid-back vibe and gorgeous scenery. What takes the cake though is that it is the site of the ruins of the last Indian empire, Vijayanagara. Here, you will gaze at a cluster of monuments all built to embody the grandeur and elegance of one of the richest empires of India. And when I say rich they were “stables for elephants” rich!

Deep rooted in the history of the country, the site is made a lot more aesthetic by the absolutely enthralling landscape of Hampi. Established in 1336, this glorious empire lasted till 1646; thus being outshone by the great Mughal Empire. 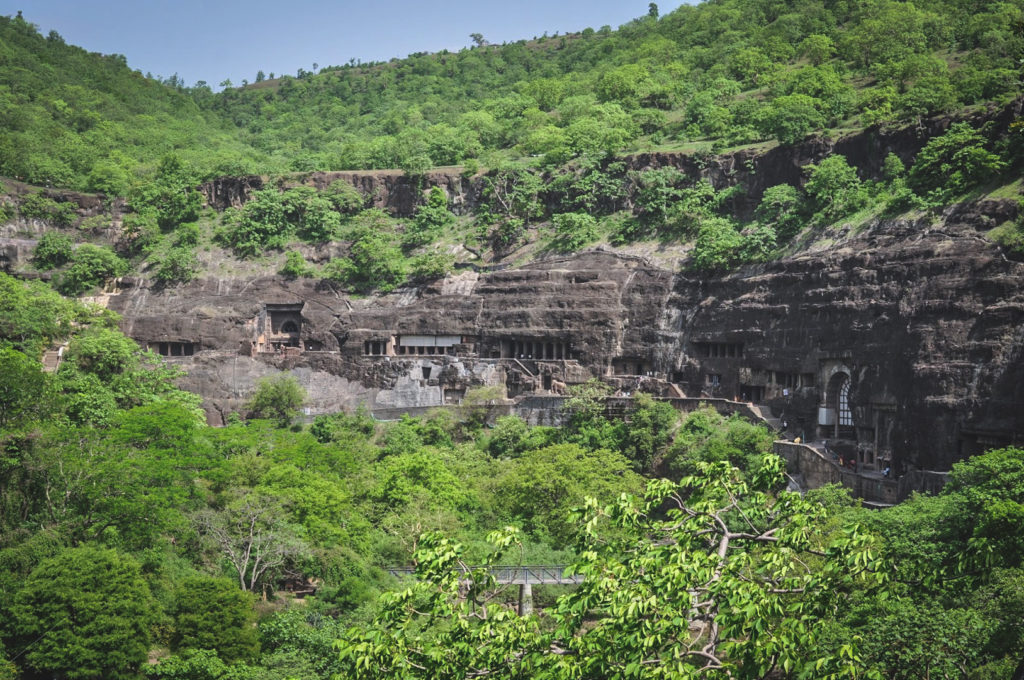 Discovered by a British Officer in 1819, the Ajanta Caves are windows to a different time. Carved depictions of life through the eras spanning centuries line the numerous incredible lengths of caves with evidence of scientific calculations strewn about. They are thought to be as old as 200 BC with the artwork varying according to the era of the artists doing the carving. Legends revolving them say that the caves were used as a refuge by Buddhist monks when the weather got particularly snappy. Or that maybe these caves led to the heavens. Paradise. But being there, shrouded by lush forests, you’d think that paradise was right here. 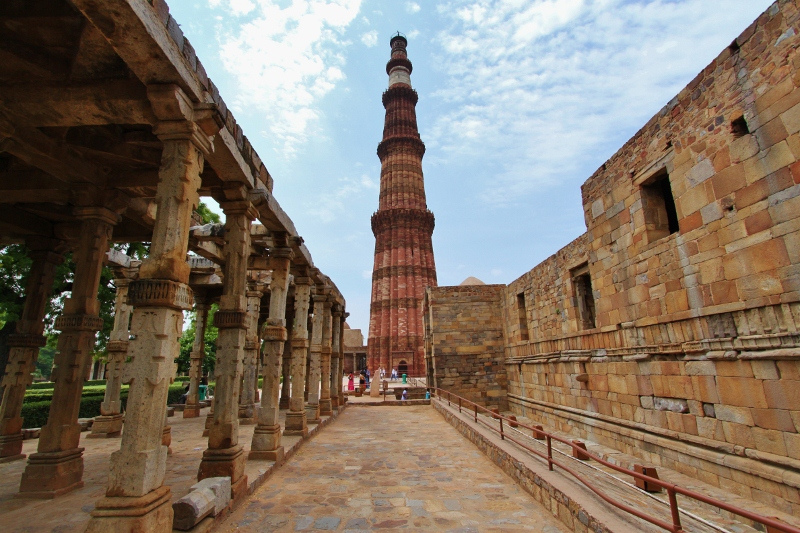 A victory tower built on the order of Qutab-ud-din Aibak in 1193, it was raised to commemorate the fall of the last Hindu kingdom of Delhi. Made of red sandstone and marble, it has five distinct storeys which tapers as it nears the top; from a solid 15m diameter to 2.5m at the very top. Its significance to the birth of Indian secularism is proclaimed by the mosque at its foot, which was the first ever mosque to be built in India; barring the fact that a plaque there boils down to inform us that the tower was built by destroying 27 Hindu temples!

The tower stands tall at 73m whereas the mosque is steals quite a bit of interest from visitors too. The 7m high iron pillar in the mosque is a granter of wishes; if and only if you can make your hands touch around it while keeping your back to it. Didn’t think it would too straightforward, did you?! 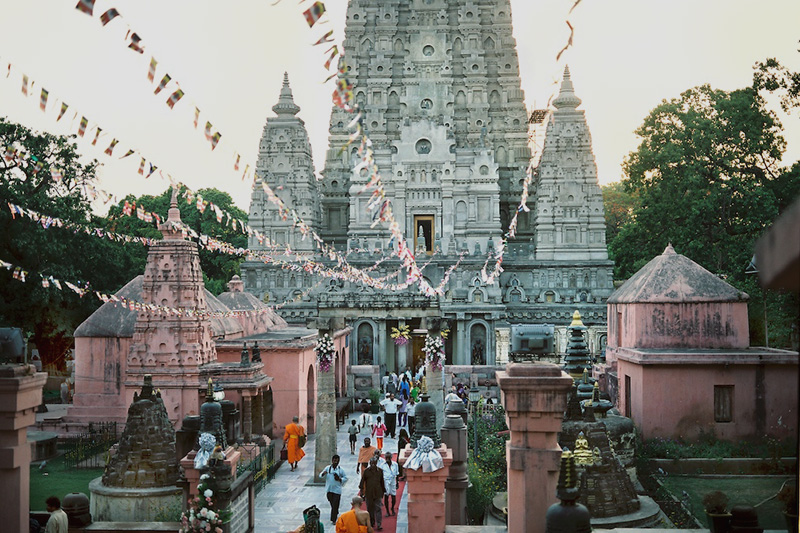 Prince Siddhartha, born sometime around 560 to 480 BC to the chief of the Shakya clan (Present day Indo-Nepal border), spent 29 years as a Prince; shielded by his father from religious teachings and human suffering, family bound with a wife and son, and ensured of every provision. 29 years before he discovered suffering and disease among his subjects, and quit his palace for a life in pursuit of spiritual enlightenment as a way of peace.

These temples were built on the site of that phenomenon; where, under a peepul tree, the prince found his life’s goal, his spiritual goal. Now a UNESCO World Heritage Site, this is where the Peepul tree was rechristened as the Bodhi Tree. Where Prince Siddhartha became Lord Buddha. 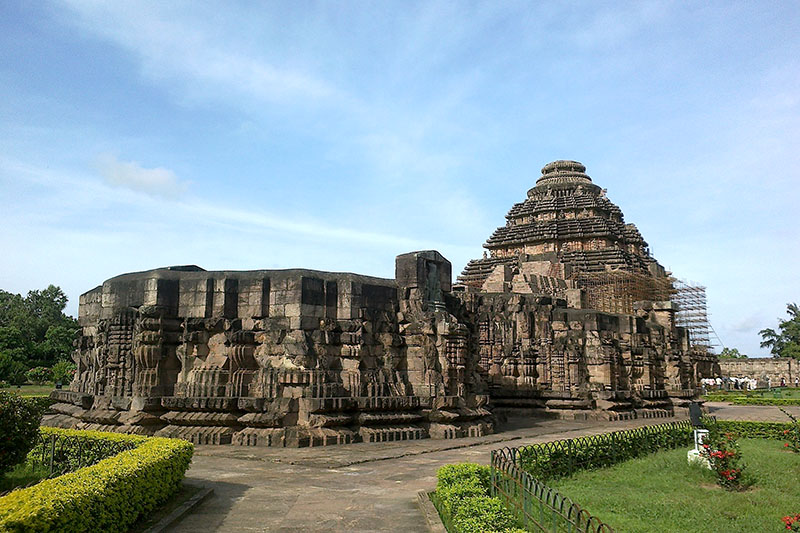 This incredibly astounding expression of intricate artistry was built as a requiem to the Sun God of the Hindu mythology. Blending an amazing mix of scientific ingenuity and architectural masterstroke, the structure platters up to you an array of wonders, from the fascinating stone carvings to the beautiful sun dials that keep accurate time even to this day! Magnificent depictions of the Sun God on his 24-wheeled chariot pulled by seven horses are so gigantic that you can’t help but gawk at the sheer enormity of the craftsmanship here. To put into perspective, it is guarded by two humongous lion treading upon elephants. 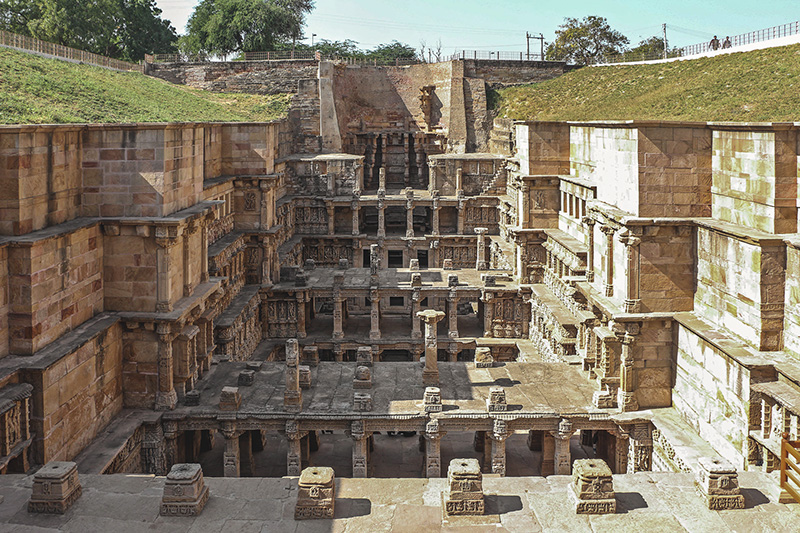 The Queen’s Stepwell. We could write about this and be as articulate as we can, and still come up vastly short of the real thing. The artisans building this one went above and beyond to create something downright ridiculous and wonderful simultaneously. This jaw-dropping masterpiece was built to worship one of our holy rivers, the Saraswati, because of which it was crafted upside down. That’s right. The temple and every structure in it are upside down and adding to the wonder is the fact that it is subterranean. 64m long, 20m wide and 27m deep with up to seven storeys, the Rani ki Vav is a sight to behold.

Lined with beautiful scriptures centred around the ten incarnations* of Lord Vishnu, it hasn’t lost its fascination since the 11th century AD, when it was completed.

*In Hindu myths, it is common for the prominent Gods (we have many Gods!), to take birth on earth as mortals as a means to an end. Lord Vishnu is known to have had ten of these incarnations or avatars, including one as a fish!

Faith is an extraordinary paradox. Capable of destroying as it creates. But as our forefathers believed, faith was meant to destroy pain and suffering while creating peace. And it is faith that created these beautiful works of art; faith in love, religion or the human spirit. But one thing is a guarantee; you don’t need to be a believer to enjoy India and our arsenal of incredible art.

Uttarakhand – Of Yogis, Hills and Spirituality