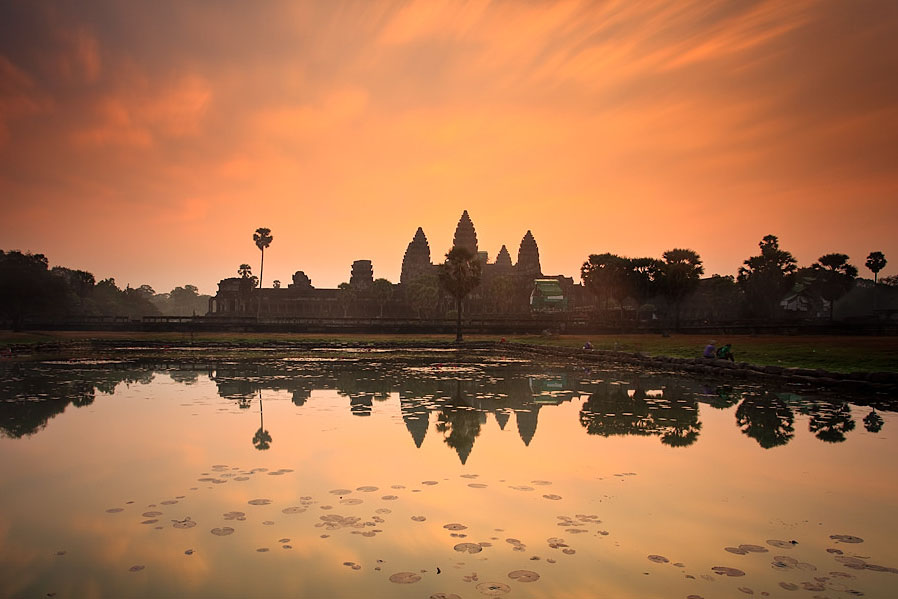 Jungles, waterfalls and a plethora of historical monuments, contemporary Cambodia is the successor state to the Khmer empire which ruled much of what are now Laos, Thailand and Vietnam. A nation that has been through hell over a blood dribbled history, it never fails to stay true to its unyielding spirit and unwavering optimism. Cambodia’s real treasures include the cornucopia of temples, monuments awash with history, thriving wildlife, authentic beaches and of course, its ever smiling occupants. From the commercialized capital of Phnom Penh in the south to the coastal mountains of Cardamom to the historical Angkor in the north, this nation is the whole package.
Angkor Wat, the ultimate expression of Khmer genius, stands proud next to Siem Reap with its inner city of Bayon and the dramatic Ta Promh monastery. Check out the largest freshwater lake in Southeast Asia that is the Tonle Sap Lake, its famous floating village and a mesmerizing Apsaras Dance performance while milking out Siem Reap of everything it has to offer.

The unique French – Cambodian cocktail of culture awaits you at Battambang in the Northwest and the rich history that the capital of Phnom Penh has to offer in the south. Here, the villa of Napoleon III makes for a special tour south of the Royal Palace. The villa, built in the 1800’s for the opening of the Suez Canal, was a gift to the King and thus is quite a spectacle on its own despite the presence of the extravagant Silver Pagoda it so very well complements. Embrace the horrors of history at the Tuol Sleng Museum and its memorial where you come to grips with the tragic past of these ever so congenial people.
Although not quite the Las Vegas of Southeast Asia, Sihanoukville on the Southwestern coast offers the highly recommended visit to the very placid Bamboo Island and casinos. The wildlife of Kampot in the south and Koh Kong in Cardamom, the beautiful crafts of Angkor, and the waterfalls of Tatai adds to the traveler’s high that is Cambodia. Unravel the enigma that is this country with us as we pick out the best of everything with a bunch of quirks for you to enjoy.

Places to visit in Cambodia 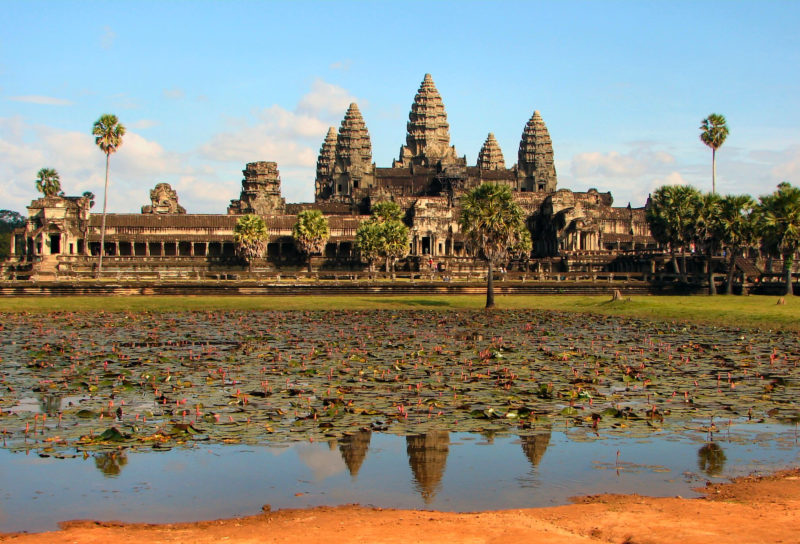 Let the sightseeing begin with a visit to the ultimate expression of Khmer genius, the Angkor Wat. Miraculous in its creation, it is inconceivable that a human being possessed the creative brilliance to be the architect of such a wonder. A beautifully cataclysmic collision of spirituality and symmetry, it remains an endearing testament of the devotion we shower the Gods with. Escape into a world unlike anything you have ever experienced before and blend into the history and the long-standing legend of the place. Said to be the largest religious monument in the world, it has a moat and an outer wall that stretches for 3.6 kilometres. 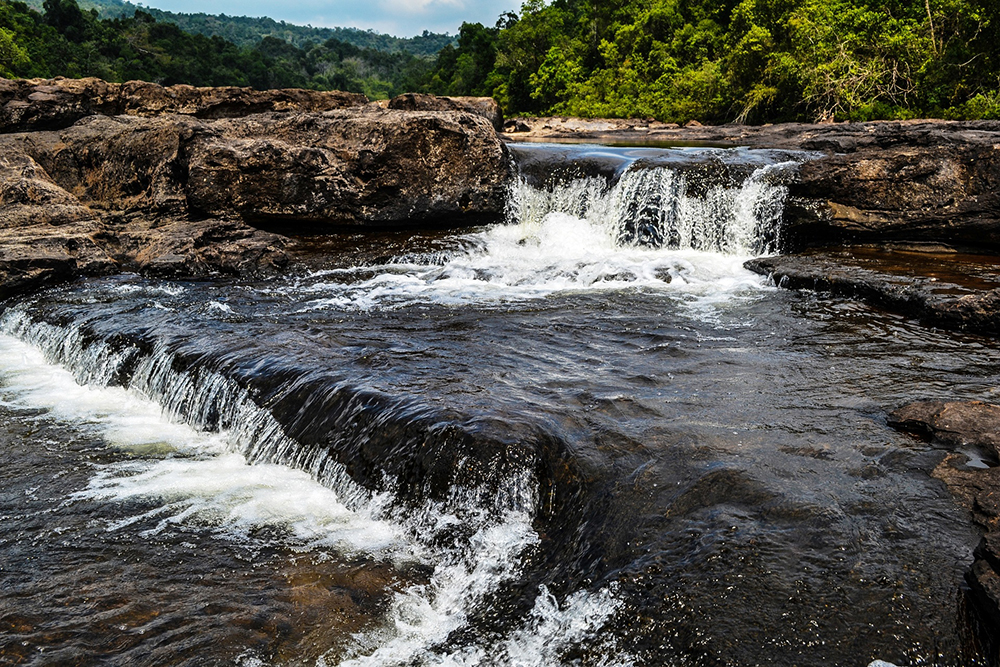 Begin your day with an energizing breakfast and then a boat ride past the Tatai village along the river of the same name to its thundering waterfalls. The waterfalls have two stages; the first one being 5-6m high and the second one being 12-15m. As the source originates in the Cardamom Mountains where human settlements are scarce, the water is very clear. The sound of the cascading waters will seem to be pleasantly complementing the serenity of the previous day. Lose yourself to the beat and rhythm of the jungle as you stroll through it, the sounds of the birds and animals providing sweet music to your ears. 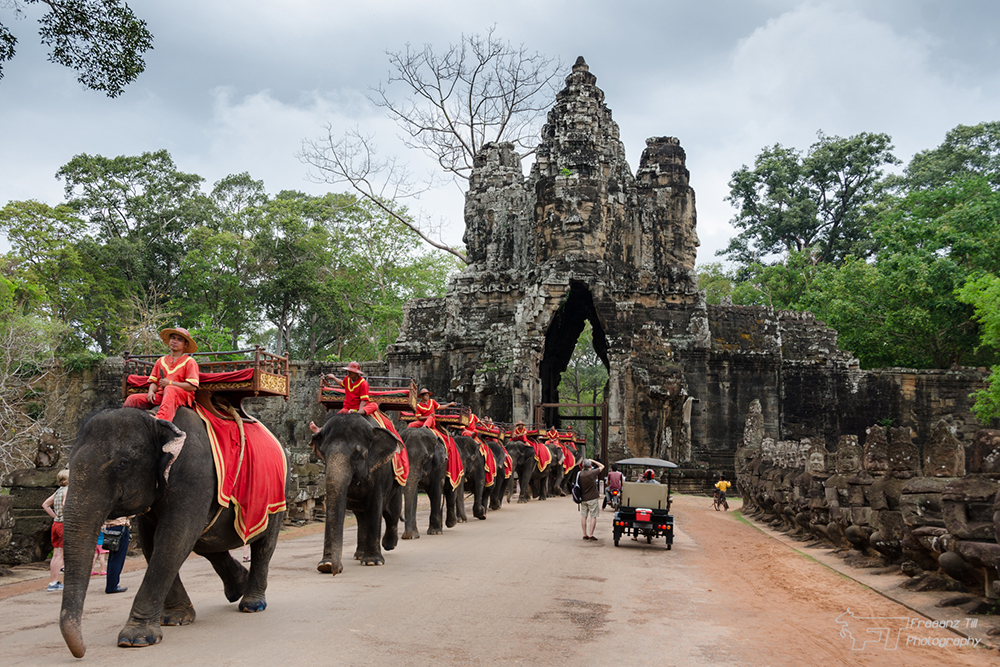 The capital city of the Khmer Empire, Angkor Thom is the textbook definition of the term, ‘fortress’. Following a surprise invasion by the Chams, then ruler, Jayavarman VII, swore to protect his Empire from further embarrassing sackings such as that. And by God, did he. Surrounded by a formidable wall 8m high and further bordered by a 100m wide moat, the city was built to stand and thrash back foe after foe. Some of the temples inside the walls of this city are Bayon, Phimeanakas, Baphuon, Terrace of the Elephants, Terrace of the Leper King, PrahPalilay, TepPranam and PrasatSuor Prat. Both the Terraces were former spaces of public ceremonies, adorned with bas-reliefs, which is a method of moulding or stamping where the design stands out to a lower extent. 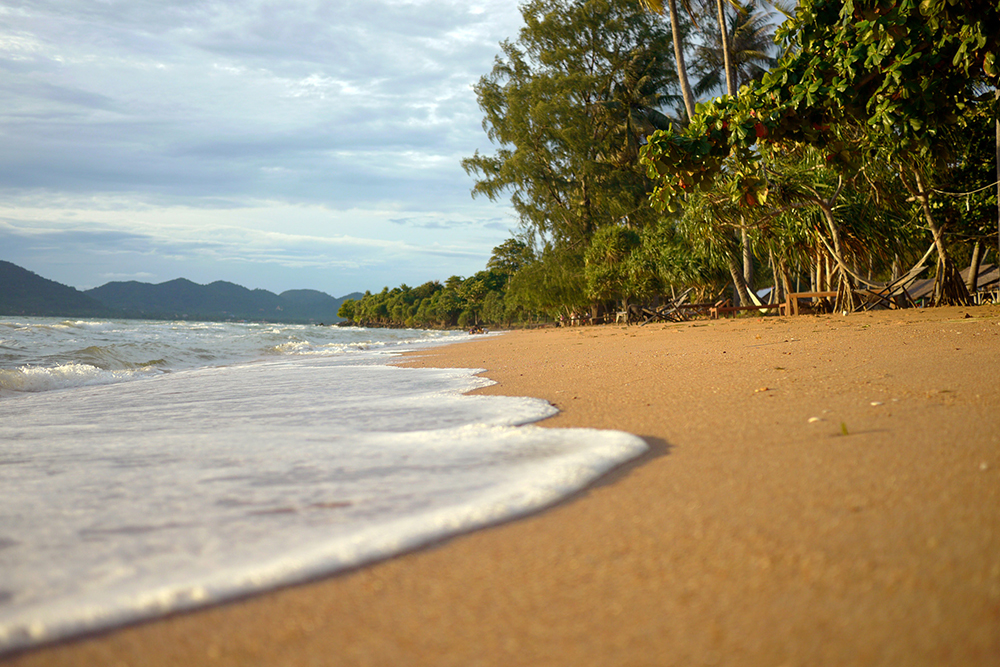 Join an excursion to Rabbit Island and enjoy a relaxing stroll along the sloping coastline. Swim in the number of the pleasant beaches here and mingle with the local fishing community before embarking for Kampot. It has a 250m long beach all for you and is one of the nicest of any of the Kep-area islands.

Kampot is an amalgamation of everything that takes us back in time. Like the whole town went to sleep one night a few years back and forgot to wake up. A riverside town with its streets lined with a fathomless number of shops of dilapidated architecture. Use this day to visit the various limestone caves spread across this beautiful town like the White Elephant cave and the caves in Phnom Chhnork.

Visit the charitable Champey Academy of Arts, a marvellous non-profit endeavour started to teach the destitute community the traditional Cambodian arts for free. It also has the added benefit of preserving the culture and arts of traditional Cambodia. Founded in 2013, it also offers a chance to procure some of the students’ works for yourself. Also, check out the National Museum to take a look at the Khmer art and sculptures exhibited there. Cambodia’s largest museum of cultural history is also the country’s leading historical and archaeological museum. The collection includes over 14,000 items, from prehistoric times to periods before, during and after the Khmer Empire, which at its height stretched from Thailand, across present-day Cambodia, to southern Vietnam. 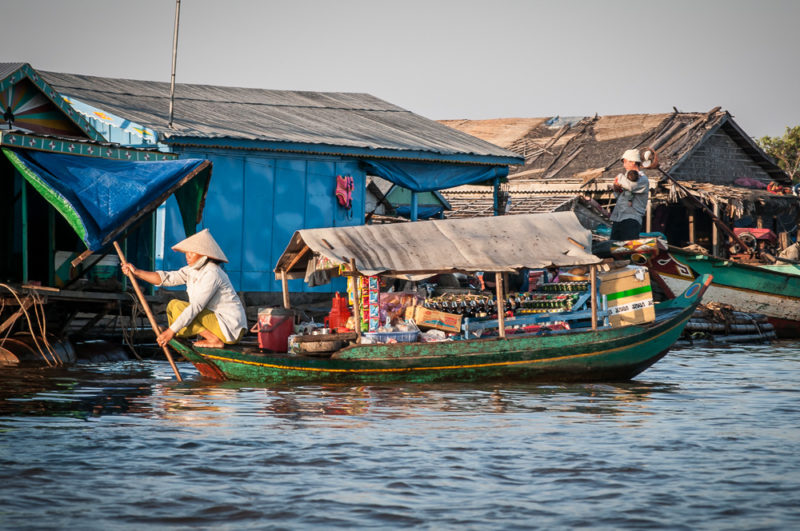 Make a visit to one of the less visited floating villages of Siem Reap, Kompong Khleang, known for its local markets and traditional Cambodian lifestyle. Enjoy observing the different methods of fishing employed here like ‘fish badminton’ while feasting on the delicious watermelons acclaimed to be the best in the country. Stilt houses as high as 10m, the great Tonle Sap lake, and a journey up the Khleang river on a river craft neatly ties it in. Learn about the significance of the lake from the guide and marvel at its importance to Cambodia.

The country is warm all year round but the dry season, between November and May, is when there is very little rain and tourism peaks. The cool part of this season (November-Feb) presents the best time to go sightseeing. March to May is usually very hot (35 degrees) so this is a good time to visit the coast!
Generally July-October is the rainy season and even though this presents a few practical challenges, it also gives the whole country a beautiful disposition. 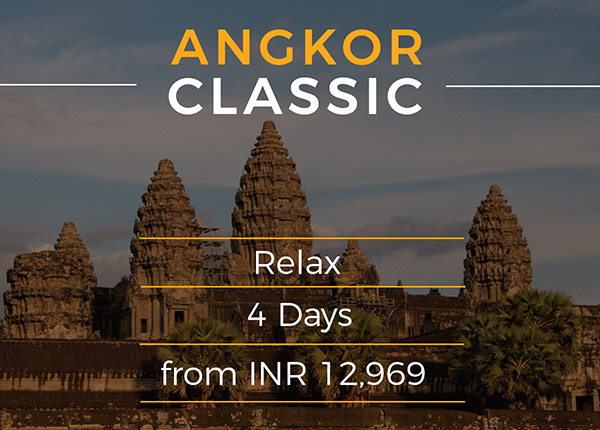 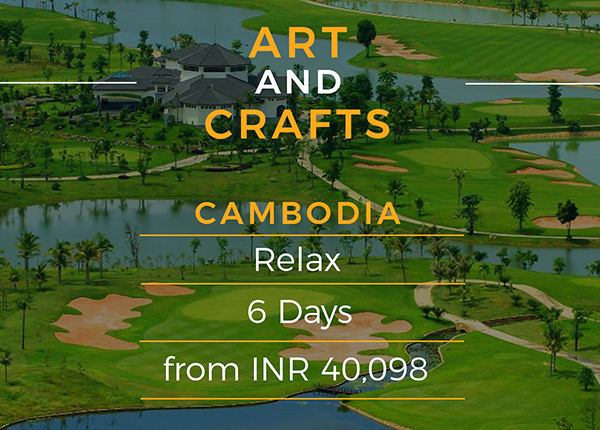 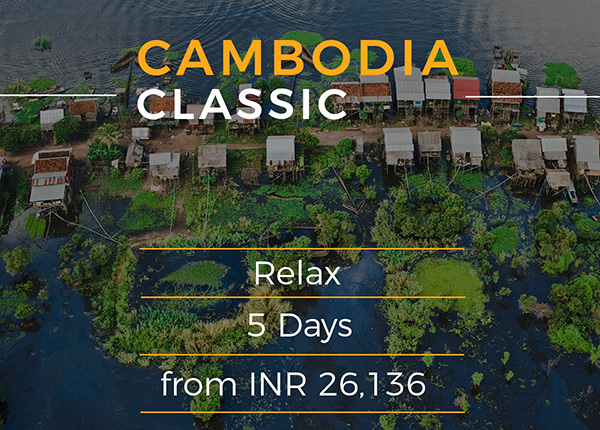 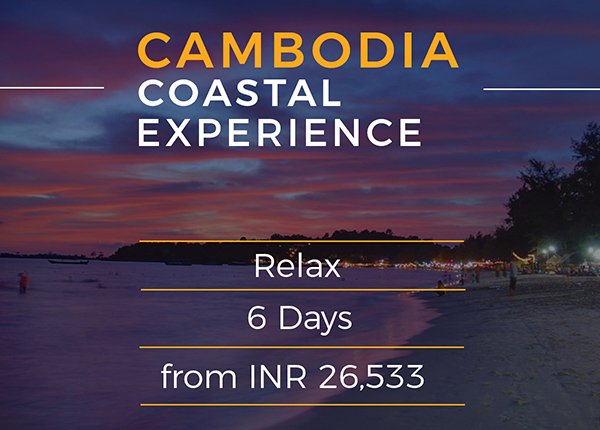 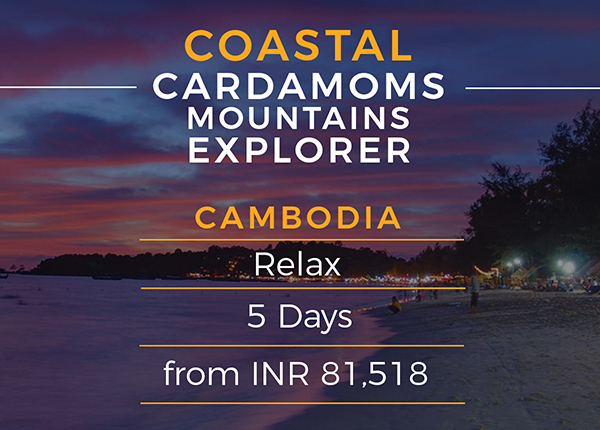 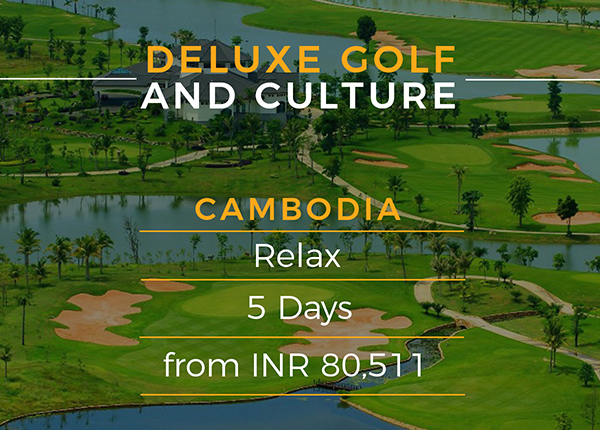