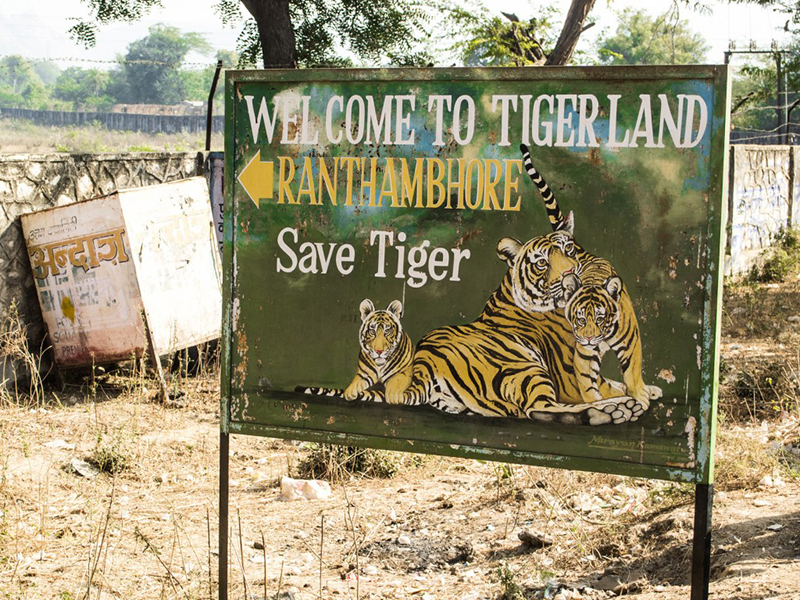 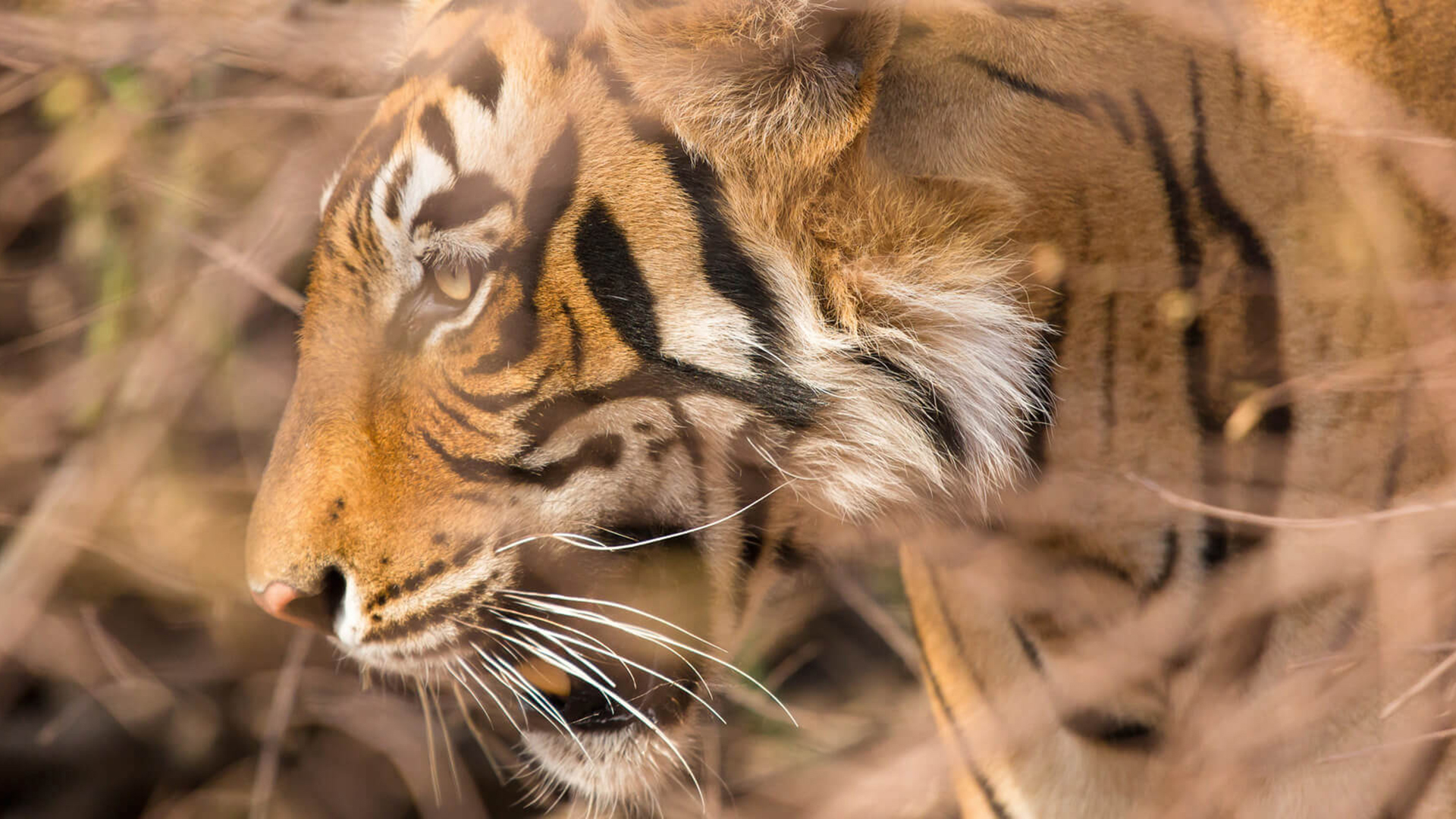 Fancy watching a Royal Bengal tiger in its natural habitat? The Ranthambhore National Park, located in the Sawai Madhopur district of eastern Rajasthan (130 km from Jaipur), is the place to be. Once the famous hunting grounds of the Maharajas of Jaipur, today Ranthambhore National Park attracts wildlife enthusiasts, patient photographers and curious tourists from across the globe.

Did you know that the most photographed tigress in the world – Machali, also known as ‘Lady of the Lake’ – was a resident of Ranthambhore National Park? Last August, the royal tigress passed away at the age of 20, making her the world’s oldest-surviving tigress in the wild. She has left behind a rich legacy and ambitious progeny.

Although Ranthambore became a national park in 1980, it was only in 1991 that the tiger reserve was enlarged to include the Sawai Man Singh and Keladevi sanctuaries. Apart from the rich wildlife, Ranthambore is also counted among the famous heritage sites of India, courtesy the 10th-century Ranthambore Fort and striking ruins that dot the dry deciduous forest.

Here’s a sneak peek at what’s on offer at the world-famous Ranthambhore National Park: 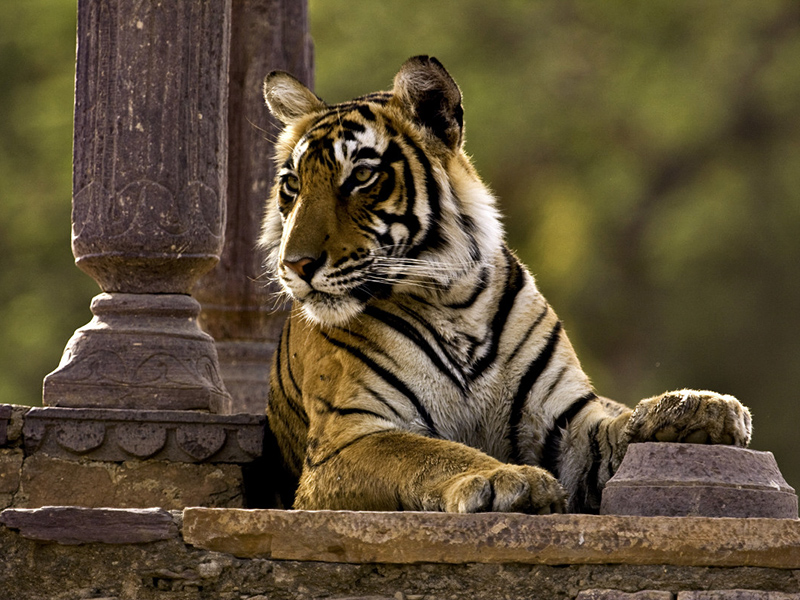 Tiger sitting in a chattri of Ranthambore Palace

If you don’t spot a tiger in Ranthambore over a couple of safaris, consider yourself unlucky. Because tiger sightings are extremely common at the national park. From watching the Royal Bengal Tiger chasing its hapless prey to playing with its little ones, visitors are often overwhelmed by their close encounters in the wild. Also, these majestic tigers seem to love posing for photographs! 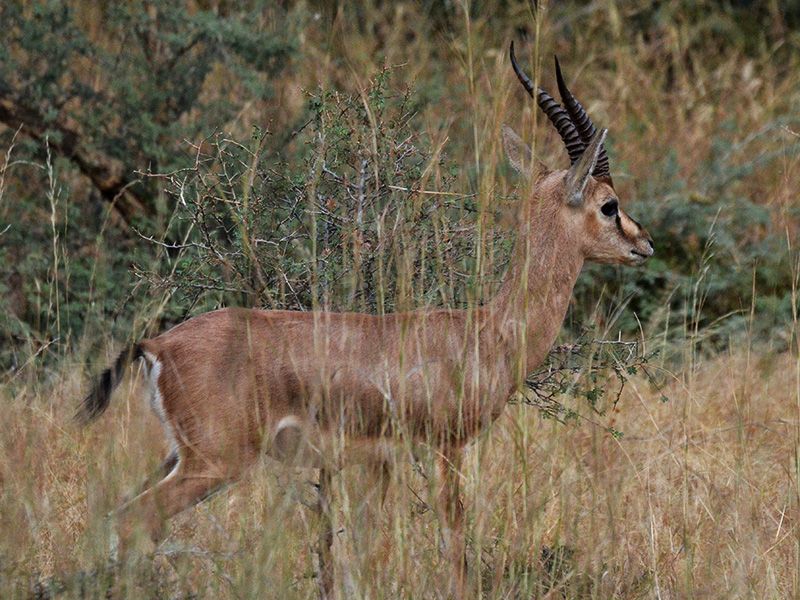 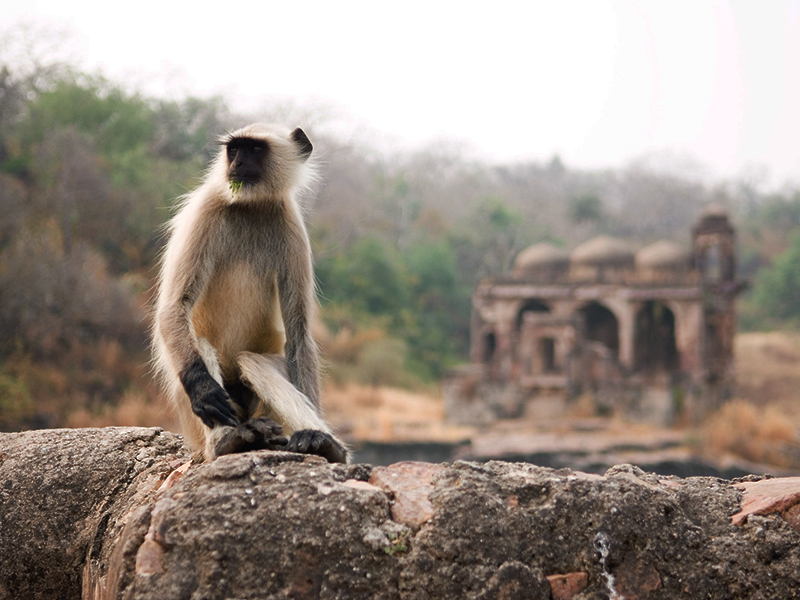 Don’t be fixated only on the tigers though. There are many other beauties to behold – from mammals, like the Nilgai, Striped Hyenas, Jackals, Hanuman Langur, Chinkara, Wild Boar, Indian Flying Fox, Sloth Bear and Jungle Cat to reptiles, such as, the Snub-Nosed March Crocodiles, Monitor Lizard, Indian Chameleon, Ganges Soft-Shell Turtle, and snakes like the Cobra, Common Krait, and Indian Python. 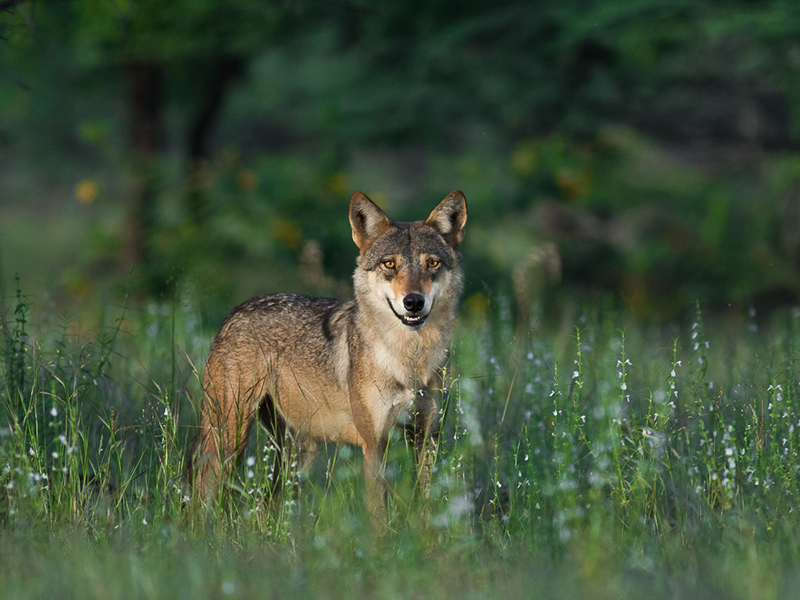 Did we mention the elusive Indian Wolf? 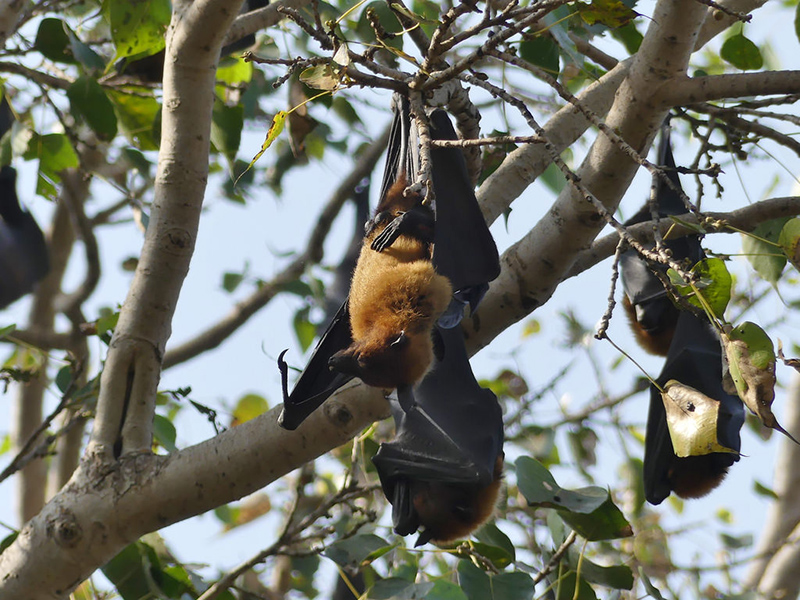 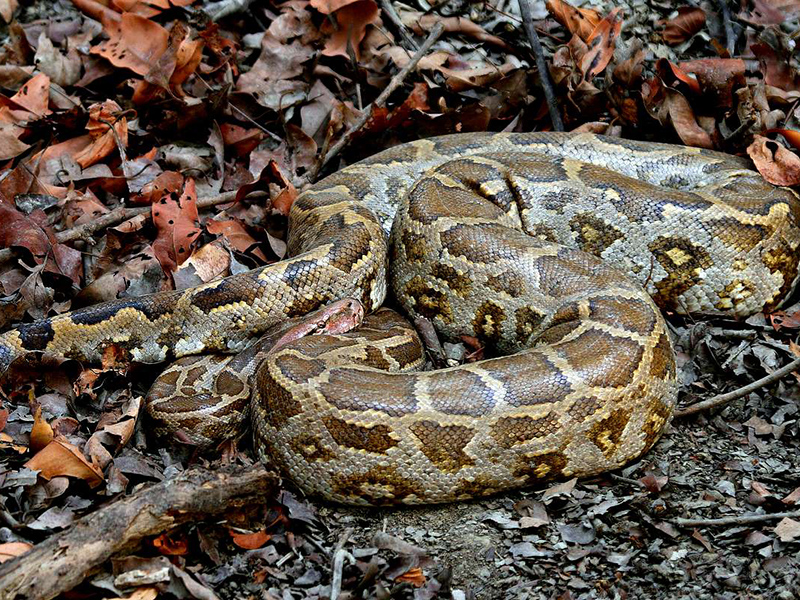 If you are on a safari during the early hours of the day or just before sunset, Padam Talao, the largest lake inside the park, is a great place to spot tigers and chinkaras. Similarly, the Bakaula region is an ideal location to watch gorgeous tigresses bond with young cubs. 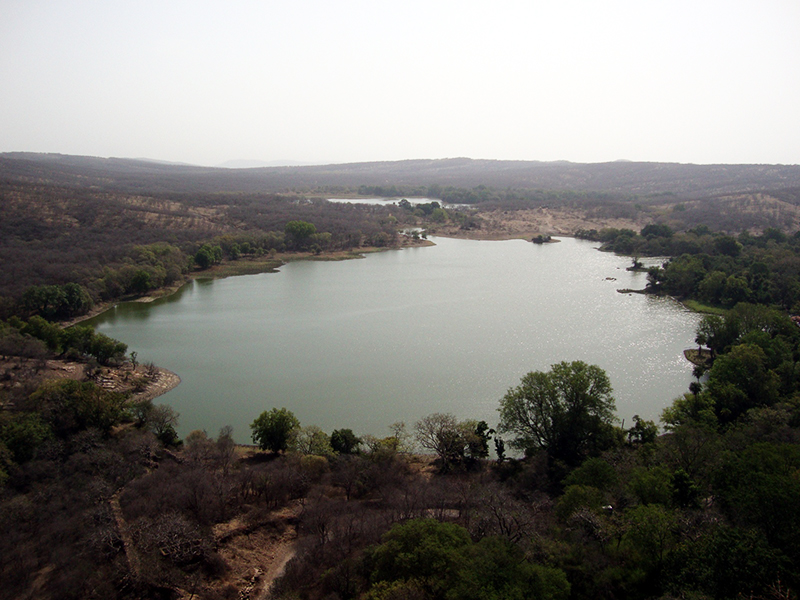 Different zones in the park are known to attract different inhabitants. Panthers, for instance, like to stay at the outskirts of the park, away from the tigers. So, the Kachida Valley is the best place to find Panthers. Likewise, Sloth Bears seem to prefer the Lakarda Anantpura zone, located in the north-western and northern regions of the park. For a dekko at the Sambhar Deer, head towards the Rajbagh Talao.

Come winters, and huge flocks of migratory birds head towards Ranthambore in search of a sustainable habitat. Thanks to its varied terrain and abundance of water bodies, Ranthambore National Park has a population of over 300 species of resident birds. From woodpeckers, Indian Gray Hornbills, Kingfishers, Cuckoos, Parakeets, Asian Palm Swift, Owl, and Nightjars, to Crakes, Snipes, Sandpipers, Gulls, Terns, Great Crested Grebe, Darters, Cormorants, Egrets, Herons, Bitterns, and more…the list of birds that dot the Ranthambore National Park skies are rather impressive! 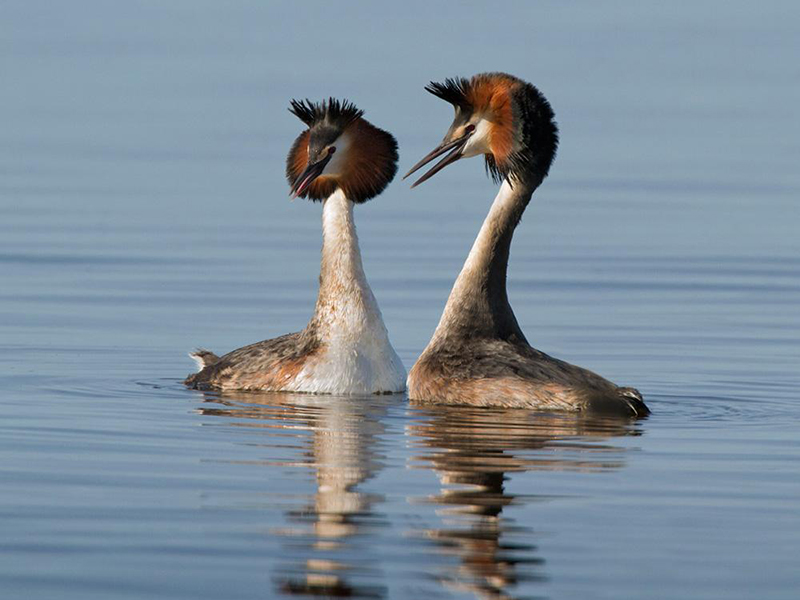 You don’t have to be a birdwatcher to fall in love with the avian inhabitants of the famous park. For some truly memorable finds, spend time at the Malik Talao, RajbaghTalao, Padam Talao and Jhalra area. Not to forget the ancient Ranthambore Fort, which stands atop a hill, majestically overlooking the entire park. Bird photographers are known to enjoy long walks on the outskirts of the park – armed with their cameras, of course! 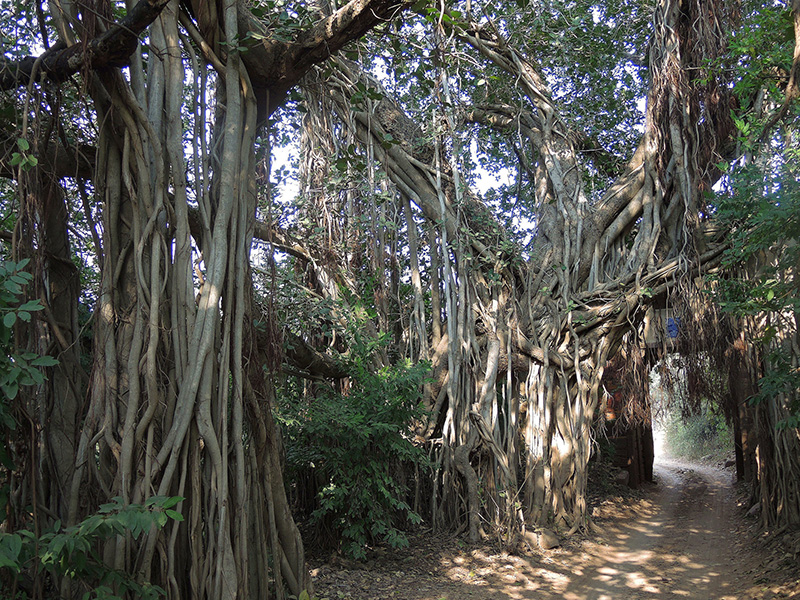 Ranthambore is blessed with some of the best fauna

The flora here spans a wide variety of over 300 species, of which Dhakdominates the tree cover, due to its ability to survive even in drought-prone areas. What’s more, the Dhak, also known as the ‘flame of the forest’, brightens up its arid surroundings with gorgeous flowers in orange and red hues. 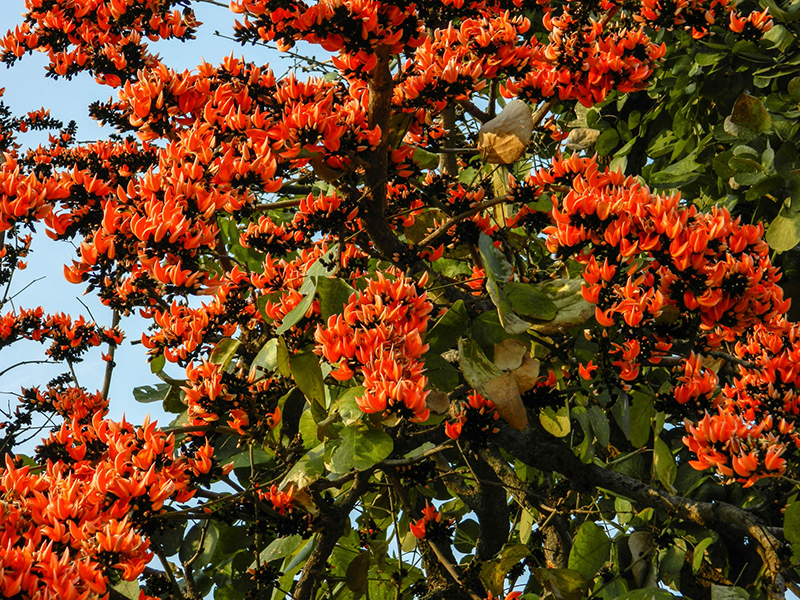 Dhak Trees Look Aflame due to the color of their flowers

The other species of trees found in Ranthambore include Imli, Babul, Khajur, Neem, Kakera, Jamun, Kadam, Khair, Mohua, Karel, and Khejda, to name some. There’s definitely an effortless charm to this wildlife haven that attracts thousands of visitors every year. 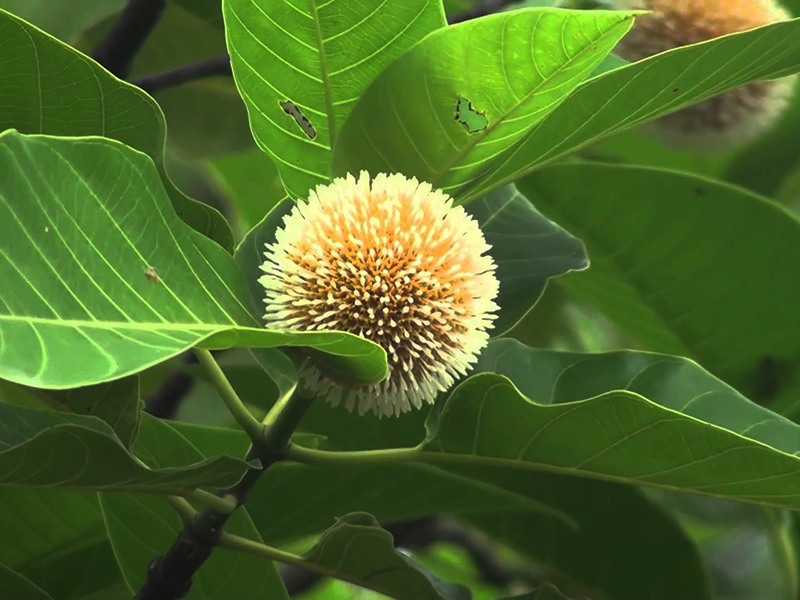 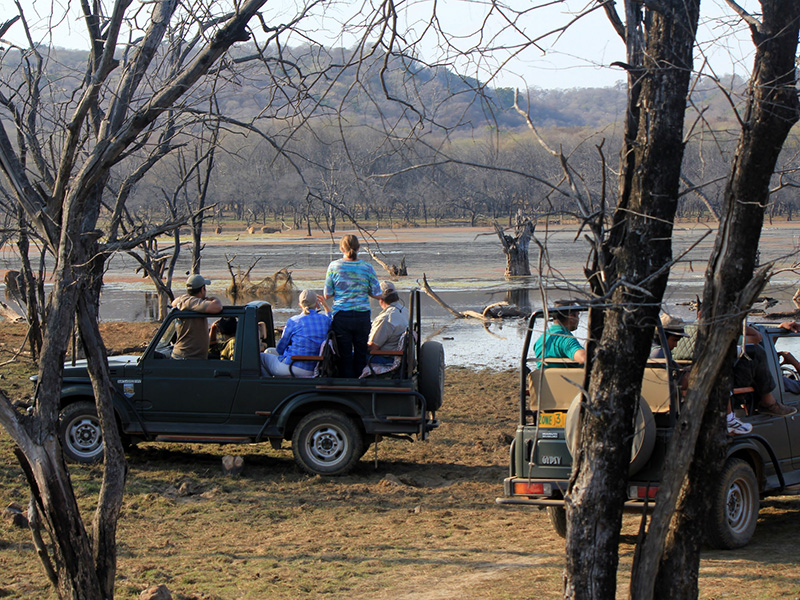 Safaris in Ranthambore are one the best

Gypsys or canters, which is the better choice for safaris at Ranthambore National Park? Typically, gypsys are less noisy – and more expensive; preferred by smaller groups of (up to six) visitors, especially photographers and birders. Canters, on the other hand, are ideal for larger groups of (up to 20) visitors. However, at the end of the day, both modes of transport follow the same path!

While mornings are believed to be better for sightings during summer (March-June), evenings are ideal for the winter (November-February). Depending on the season, remember to carry suitable clothes: Loose cotton clothing and a wide-brimmed hat for the summer; jackets, gloves and mufflers for the winter.

There are safaris in the morning as well as in the evening, with slight variations in timings through the year.

How to reach there

Why Uttarakhand is not only about Adventure